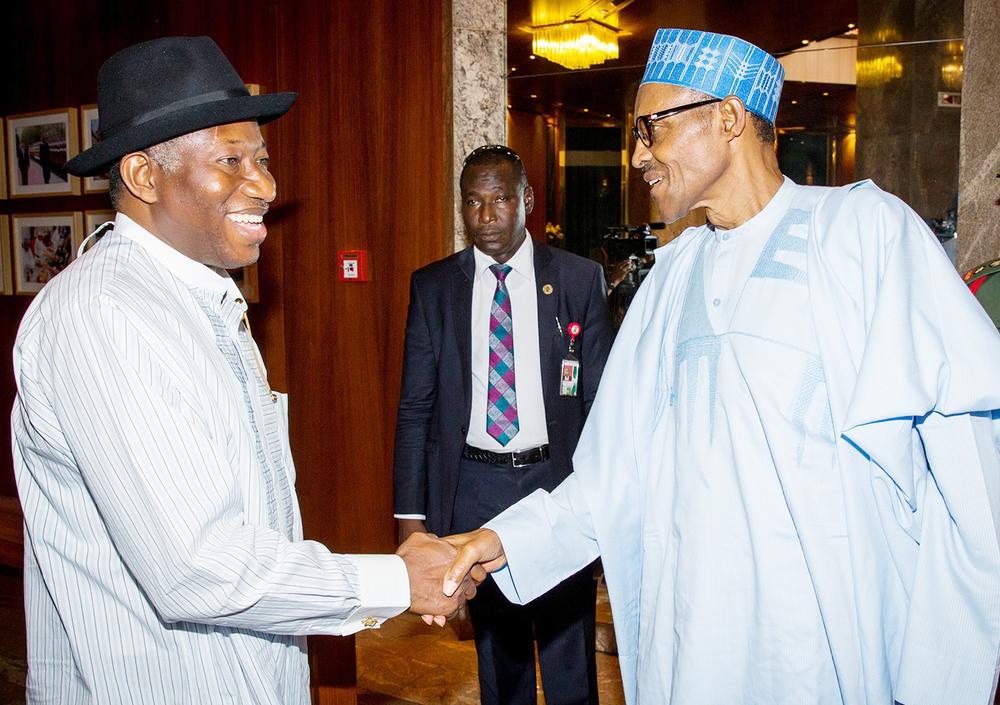 Special Adviser to President Muhammadu Buhari on Media and Publicity, Femi Adesina has described as ‘Bitter-Enders’ Nigerians who since 2015 president election have continued to express their disapproval of the incumbent administration.

According to the Presidential aide, he observed that till now some Nigerians have refused to live with the reality of Goodluck Ebele Jonathan been defeated in the 2015 presidential race.

Adesina noted that the Jonathan lovers have turned themselves to fault finding persons with the Buhari led administration, adding that they use every slightest opportunity to condemn the incumbent government.

The journalist in a recent article he titled ‘GEJ meets PMB: A lesson for bitter-enders’, said it is surprising seeing some Nigerians heating their heads against the wall, wailing and debating without end over Buhari and Jonathan.

He said, “But here are the two main men, treating each other like brothers. May the wailers stop wailing. May the Bitter-Enders be purged of bitterness”,

“They became wailing wailers, and whenever they began to ululate, you would think raw pepper had been inserted into their tender and sensitive parts. Or that their lollipops had been taken away. They throw tantrums. But I have news for the Bitter-Enders.”

Adesina noted that he was graced to sit between the two leaders on Tuesday at the State House, along with President of ECOWAS Commission, Jean-Claude Kassi Brou. Naija News understands that Jonathan is ECOWAS Special Envoy to Mali on the political crisis rocking the nation.

Speaking on the statehouse meeting, Adeshina said, “I was privileged to sit in at the meeting between our former President and the incumbent. And I took away some lessons, which should really be for everyone. President Buhari and his guest came into the diplomatic room of the Presidential Villa together. Our President ushered Dr Jonathan to the visitor’s seat.”

“A while back, Jonathan was the host in that very same room, ushering visitors to their seat. Now, he is in that same seat. If President Buhari visits the seat of power after May, 2023, he too would be ushered by somebody else. Such is life. Are you holding tight to anything today? Vanity of vanity.”

His statement continued; “We are all birds of passage. Nothing lasts forever. Not power. Not position. Not any office. Not even life. A vital lesson I’ve learnt from President Buhari is his constant realization that he would not be in State House forever. He would often tell in private conversations: “While we are here, we shall do our very best.”

“Gen. Yakubu Gowon was in Dodan Barracks for nine years. He left. Olusegun Obasanjo was there, left the first time, came back again, left willy-nilly after eight years. Generals Ibrahim Babangida, Abdulsalami Abubakar, Chief Ernest Shonekan, and all former living leaders use the visitor’s seat if they come a-visiting today. The only thing permanent in life is change.”

“How was the atmosphere between President Buhari and Dr Jonathan? Calm, friendly, characterized by absolutely no tension. No animosity. While uncountable Jonathanians and Buharists were spitting in one another’s eyes round the country, abusing one another’s father and mother at the same time, here were the two men, the perfect picture of geniality. I say again, no tension, absolutely none. They were both perfect pictures of civility.

“Dr Jonathan gave a rundown of the situation in Mali. When he concluded and made his recommendations, President Buhari was full of praises for him, saying he had elucidated clearly the Malian conundrum. “Thank you for updating me so effectively. I have a very good brief of events now”, President Buhari said. He promised to wade into the Malian situation, along with some other key Ecowas leaders.

He added, “With the briefing concluded, Dr Jonathan went into other issues. He thanked the President for giving him an official jet to make his travels convenient, and equally expressed appreciation for the Itakpe-Warri railway complex named after him last weekend. “It’s a big present for me. Thank you so much.”

The presidential aide disclosed further that when it was time exit the meeting ground, the former President made a move for the visitor’s exit door “but President Buhari would have none of it. He led him through the exit exclusively meant for a sitting President. Very impressive,” he admitted.