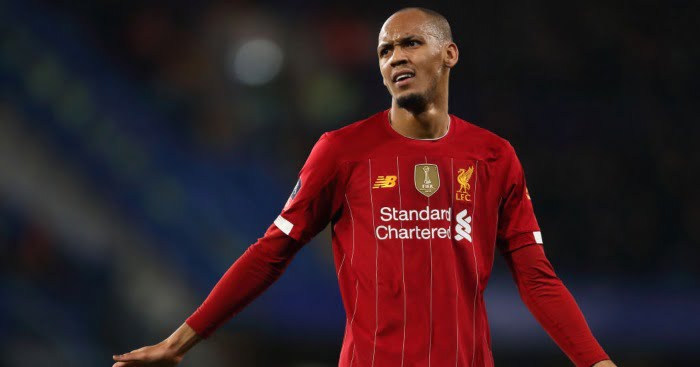 While celebrating the English Premier League title win on Wednesday, July 22, the house of Brazilian professional footballer, Fabinho Tavares who plays as a defensive midfielder for the EPL winners, Liverpool FC, was reportedly burgled.

Reports had it that the home of the 26-year-old player was raided between the hour of 3pm on yesterday and 4 am on Thursday morning while he was with his teammates and other officials celebrating the trophy win.

Naija News understands that Liverpool were yesterday handed the Premier League trophy for the first time after 30 years. The Reds on Wednesday night sealed their trophy win with a 5-3 victory against Chelsea FC at Anfield.

Given an update on Fabinho’s house theft, a Police report confirmed that jewellery items were carted away from the building while “a grey Audi RS6 was also taken and later discovered and recovered in the Wigan area.”

“The occupants, that include Fabinho and his family, discovered the house had been broken into as they entered the home,” police noted.

Confirming the report, a spokesperson for the Merseyside Police said; “Detectives in Sefton are appealing for information following a burglary in Formby. Police were called to an address in the early hours of this morning (Thursday, 23 July), when the occupants entered their house to find it had been burgled.”

“No-one was in the property at the time of the incident but it was thought the burglary happened sometime between 3 pm on Wednesday, 22 July and 4 am on Thursday, 23 July. A number of jewellery items were stolen, alongside a grey Audi RS6, which has since been recovered in the Wigan area.”

The report added, “The house and car have been forensically examined by Crime Scene Investigators and CCTV enquiries in the area are on-going. Detectives would urge anyone who has any information about this incident, especially anyone who was in the area and may have dash-cam footage which shows a grey Audi RS6 to get in contact. DM @MerPolCC or call 101 quoting reference 188 of 23 July. You can also contact @CrimestoppersUK anonymously on 0800 555 111.”

In another news, Naija News reported that Napoli are close to securing the services of Nigerian striker, Victor Osimhen and the deal could be announced as soon as Friday.