After many years of military rule, Nigeria returned to democracy in 1999 and it has remained like that till now – the longest democratic stretch since the country gained independence in 1960.

The return to democracy also paved the way for elections into various political offices, including the legislative positions.

Nigeria runs a bicameral legislature at the federal level – the upper chamber of the National Assembly known as the Senate and the lower chamber known as the House of Representatives.

Elections hold every four years and the citizens of the country get to elect their representatives. However, for legislators, there is no limit to the number of times they can contest for office, in fact, they can remain in the position for life as long as their people keep electing them into the position.

This makes their case different from that of the executives (president and governors) who have a maximum of two terms of four years each.

Naija News reports that the peculiarity of legislative positions has turned some of these politicians into ‘political landlords’ in Abuja.

The opportunity presented to these lawmakers has given some of them the privilege of becoming ‘landlords’ in the National Assembly as they continue to represent their people in Abuja.

Below are some of them that have used a considerable number of years as federal lawmakers representing their constituencies.

Senator Ekweremadu was first elected to represent Enugu West Senatorial District in 2003 and has remained in office till now.

Ekweremadu is a lawyer turned politician who has enjoyed a good time in Abuja representing his people. He announced that he won’t be seeking re-election as a Senator after his current term expires in 2023.

Lawan came into the National Assembly in 1999, as a member of the House of Representatives, on the platform of All Peoples Party (APP), which transformed into the All Nigeria Peoples Party (ANPP) and later merged with two other parties to form the current ruling APC in 2014.

Upon APC’s victory at the polls during the 2019 election, Lawan emerged the Senate President, after the inauguration of the ninth Assembly.

He is a teacher-turned politician and has a doctorate degree in Remote Sensing.

Ndume, currently represents Borno South in the upper legislative chamber, but was first elected in 2003 to represent Chibok/Damboa/Gwoza Federal Constituency.

He served as the Minority Leader of the Senate during the sixth (6th) Assembly in 2007.

In December 2010, Ndume defected from the ANPP to the PDP, citing the injustices going on in the party as his reason for leaving. He contested the Borno South senatorial election in 2011 on the ticket of the PDP and won.

He left the PDP on the eve of the 2015 general election, to join the APC. He was re-elected in 2015, made the Senate Leader at the inauguration of the 8th Senate; a position he occupied until January 10, 2019 when he was removed.

He contested against Lawan for the position of Senate President during the ninth assembly but was not successful.

Ndume was born on November 20, 1959, in Gwoza, Borno State. He has a 1982 Higher National Diploma (HND) in Marketing from Kaduna Polytechnic. He also acquired a B.Ed and M.Ed in Business and Computer Education from the University of Toledo Ohio, United States of America.

Manager (56) was sworn in as a senator in 2003 to represent Delta South and since then he has been at the Senate.

He is a graduate of the Ahmadu Bello University, Zaria where he studied law. He, of course, is one of the ‘landlords’ as well.

Born in Karu in the Federal Capital Territory, Aduda is the bona fide ‘landlord’ of the National Assembly being the representative of the FCT where the National Assembly is situated. Fondly called ‘Landlord’ by his colleagues, Aduda was first sworn in at the House of Reps in 2003 and he was there until 2011 when he stepped up to the Upper Legislative Chamber.

Senator David Mark was first elected into the Senate in 1999 when Nigeria returned to democratic rule as the Senator representing Benue South senatorial district in the National Assembly.

He has consistently been contesting on the platform of the Peoples Democratic Party (PDP). He was re-elected in 2003, 2007, 2011, and 2015, making him one of the highest ranking lawmakers in the Senate.

In 2007, he emerged the Senate President and occupied the position for eight years, making him Nigeria’s longest-serving President of the Senate.

Prior to becoming a politician, Mark also served as the military governor of Niger State between 1984 and 1986.

Enyinnaya Harcourt Abaribe (born March 1, 1955) is a Nigerian politician who was elected as the senator representing Abia-South Senatorial District of Abia State in April 2007.

Abaribe is a member of the major opposition People’s Democratic Party, PDP and is currently the Minority leader in the senate.

In January 2020, Abaribe during a motion against worsening insecurity in Nigeria famously asked President Muhammadu Buhari to resign.

Gbajabiamila came into the National Assembly in 2003 to represent Surulere 1 Federal Constituency of Lagos State at the age of 40.

He became the House Minority Whip in 2007 and later became Minority Leader, a position he held up to 2015. 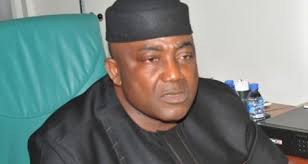 Leonard Okuweh Ogor, popularly known as Leo Ogor, is one of the most outspoken members of the House. The lawmaker has been representing Isoko North/Isoko South Federal Constituency of Delta State since 2003.

Ogor served as Deputy House Leader in the seventh assembly.

Mutu is the longest-serving federal lawmaker in the House of Representatives and has been representing his people in that capacity since 1999.

Mutu who is now 57 years old, came to the House at the inception of the current democratic dispensation in 1999 at the age of 39.

Barde was first elected as the lawmaker representing Chikun/Kajuru Federal Constituency of Kaduna State in 2003 and has remained in that position since then.

Barde is a committed lawmaker that hardly misses House sittings.

Coronavirus: Trump, Other Leaders To Meet