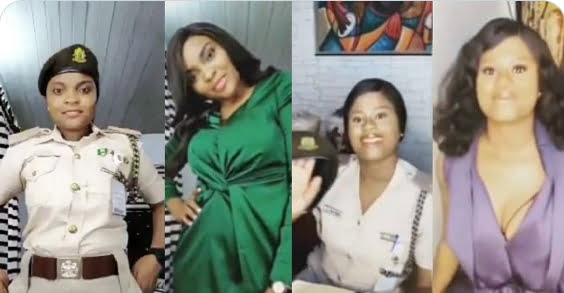 Despite the Coronavirus lockdown, the Nigeria Immigration Service (NIS) has reposted personnel that participated in the “Bop Daddy Challenge”.

Naija News recalls that the Nigerian Immigration Service (NIS) had claimed that it was totally embarrassed by the video clip in which some of its ladies were seen participating in the viral #BopDaddyChallenge.

The service said that their action has caused the organisation “a lot of embarrassment.”

According to the Assistant Comptroller General of the NIS, Iam Haliru, the video of the NIS women “revealed a rather disturbing and embarrassing display of indecent flaunting of your bodies, desecration of service uniform/beret and the use of inappropriate language thereby, sabotaging the values upheld by the service.”

This online media platform reports that Nigerian leading human rights and constitutional lawyer, Femi Falana (SAN) had appealed to the NIS to temper justice with mercy over the planned disciplinary action of Some female officers who participated in the #BOPDADDYCHALLENGE challenge.

“The government is fighting coronavirus COVID-19 and rules have been made for social distancing. This is an opportunity for the Nigerian Immigration Service to revisit their rules,”

The lawyer also said that the ladies involved apparently did not observe that they were infringing on any particular rule. “I am aware that these ladies have apologized and replied to the query and this is not an opportunity to throw people out of job,” Femi Falana had pleaded.

However, Nigeria Immigration authorities redeployed the five officers to new post across the country, asking them to report at their new assignment with seven days..

Priscilla Irabor has been transferred from the Lagos State Command to the Nigeria Immigration Training School, Kano.

Binti Attabor has been transferred from the service headquarters in Abuja to the Yobe State Command.

Catherine Bakura has been transferred from the Nnamdi Azikiwe Airport in Enugu to the Nigeria Immigration Training School Ahoada, Rivers State.

Blessing Udida has been transferred from the FCT Command to the Akwa Ibom State Command.

Ockiya Eneni has been transferred from the CERPAC (Combined Expatriate Residence Permit and Aliens Card) Production facility to the Borno State Command.

The NIS, in the letter dated May 12, 2020, declared that it will not bear the cost of the officers’ relocation. 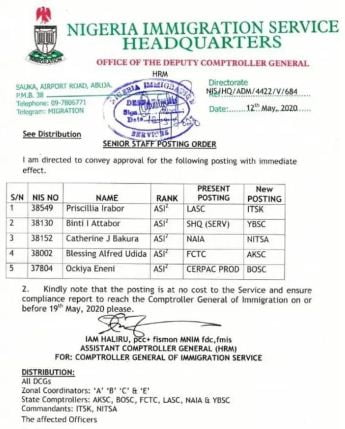