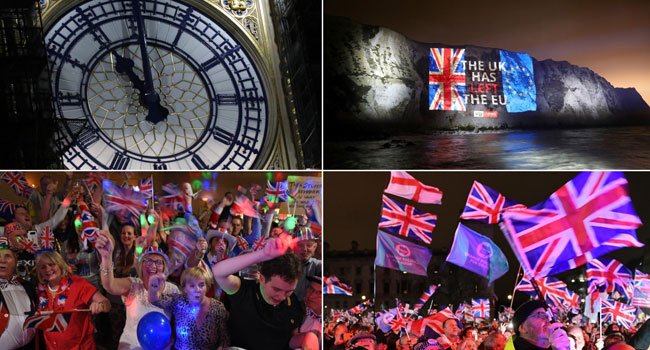 The United Kingdom (UK), has finally officially left the European Union (EU), putting an end to nearly 50 years (47 years) of integration with Europe.

Naija News reports that while speaking on the UK’s exit from the EU, British Prime Minister Boris Johnson said the country had “taken back control.”

The British PM promised a “new era of friendly cooperation” with the EU, in an address released an hour before the UK left the now 27-member bloc. He also said there may be “bumps in the road” ahead but vowed that the departure was an opportunity for “stunning success.”

PM Johnson also said Brexit has a chance for a new start and emphasized the country’s ability to succeed now it had “taken back control.”

“The most important thing to say tonight is that this is not an end but a beginning. This is the moment when the dawn breaks and the curtain goes up on a new act in our great national drama,” Johnson said in a pre-recorded speech posted on Johnson’s Facebook page at 22:00 GMT.

Johnson added that Brexit would give the UK government “new powers” to carry out policies that people in the UK had voted for.

These changes would take the shape of “controlling immigration or creating freeports or liberating our fishing industry or doing free trade deals.”

Naija News reports the British PM also addressed the divide that Brexit had created across the UK since the 2016 referendum which left the country split 53% to 48%.

“For many people, this is an astonishing moment of hope, a moment they thought would never come. And there are many of course who feel a sense of anxiety and loss.”

“I understand all those feelings and our job as the government, my job, is to bring this country together now and take us forward.”

The British PM maintained that Brexit was “right and healthy and democratic” as well as what people had voted for “not once but twice,” referring to the landslide December 2019 Conservative victory in the UK in addition to the 2016 referendum.

While delivering his speech, the British PM refrained from criticizing the EU, saying that the UK and EU had simply “evolved” in differing directions and calling the EU “friends.”

“We want this to be the beginning of a new era of friendly cooperation between the EU and an energetic Britain.” Johnson’s sentiments echoed the rhetoric of the EU parliament as lawmakers said goodbye to Britain, while stressing the importance of maintaining a close relationship.