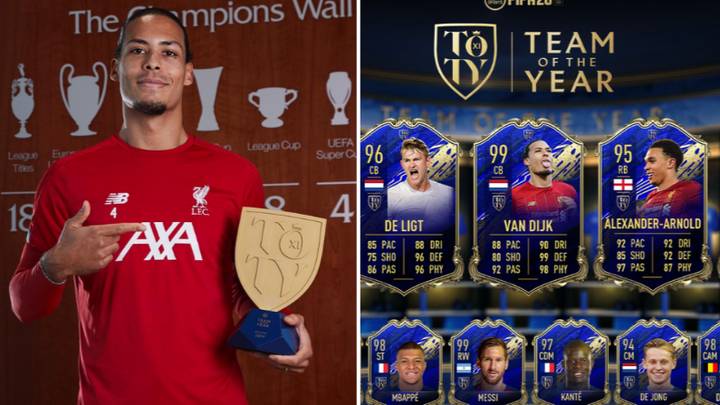 Liverpool defender Virgil van Dijk has broken a new worldwide record as the first defender to get a 99-rated card on the FIFA 20 Ultimate ‘Team of the Year’,

Naija News learnt Van Dijk was named in the FIFA 20 Ultimate Team ‘Team of the Year’ after he was voted for by fans and gamers.

It means his card has been upgraded to the first ever 99 card for a defender – with 99 for defence, 98 physical, 92 passing and 90 dribblings. Even his attacking stats are impressive, with 88 pace and 80 shooting.

Van Dijk made history in 2019 when he became the first defender to be named UEFA’s Men’s Player of the Year. The Liverpool ace was tipped to win the Ballon d’Or but was beaten in the voting by Barcelona star Lionel Messi.

Van Dijk responded to the accolade on Twitter, saying: “What a year, what an honour. Thank you for voting me into the @EASPORTSFIFA Team of the Year.”

What a year, what an honour 🏆 Thank you for voting me into the @EASPORTSFIFA Team of the Year 💪 #FIFA20 #TOTY pic.twitter.com/Lc1Bf2DvtD

Van Dijk is joined in the FUT Team of the Year by his Reds team-mates Alisson, Trent Alexander-Arnold, and Andrew Robertson, with Juventus centre-back Matthijs de Ligt the only non-Liverpool defender.