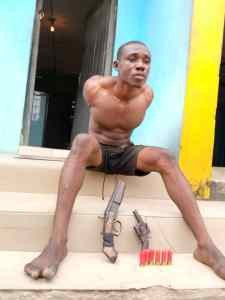 Abia State police command has confirmed the arrest of a notorious kidnap kingpin terrorising the state.

Naija News notes that there has been a drastic increase in kidnapping witnessed in the country in the last one year.

Recall that as result of the recent rate of the insecurity and kidnappings in the country, most especially in the Northern part of the country, some angry youths of Girei Communities in Girei Local Government Area of Adamawa state on Tuesday staged a protest, calling on President Muhammad Buhari to intervene.

The spokesperson of the Abia State police command, Ene Okon, disclosed that the notorious kidnap kingpin, Darlington Olewumbu, was arrested after months of chasing him with the help a team of detectives led by the Divisional Police Officer, DPO, Ndiegoro Division SP Alphonsus Ayang.

Olewumbu’s arrest was made at Agu Street, Ndiegoro community, leading to the recovery of some items which includes; one locally-made revolver pistol with live ammunition, one locally-made double-barrel shotgun and 6 live cartridges.

Okon added that the command has made efforts towards the arrest of the other members of the gang, as Oluwembu upon his arrest confessed that his gang were about embarking on another kidnapping.