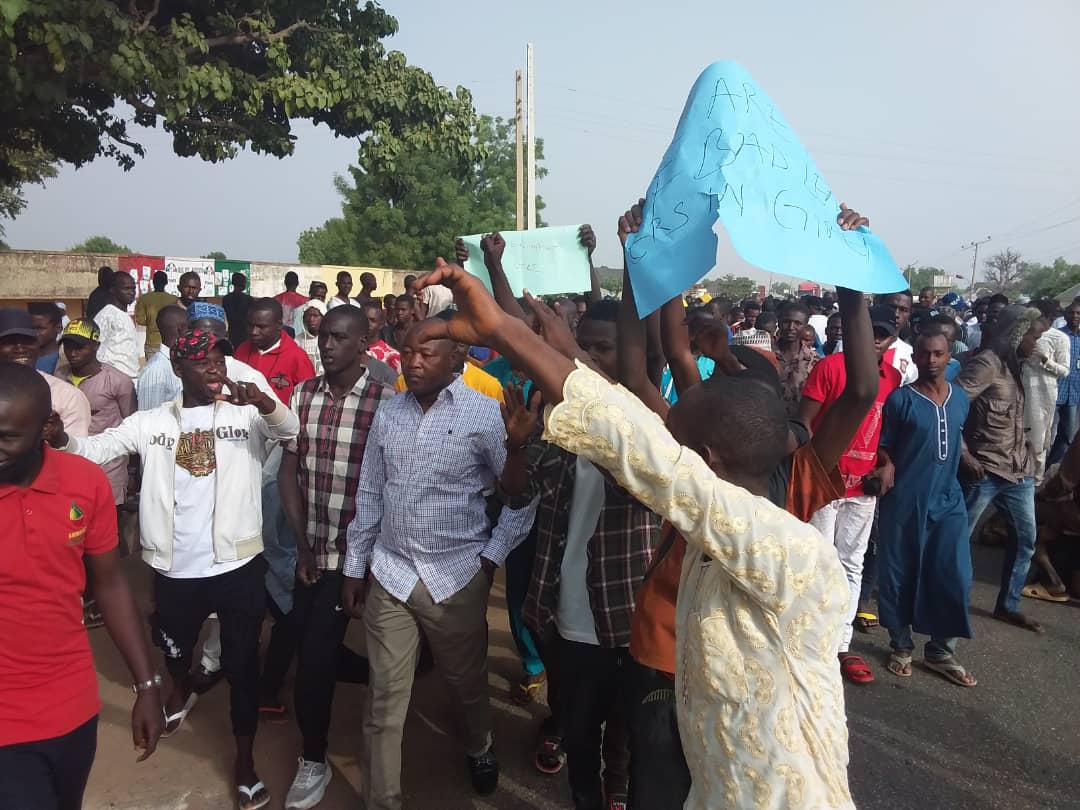 Worried by the recent rate of insecurity and kidnappings Girei Communities in Girei Local Government Area of Adamawa state on Tuesday staged a peaceful protest calling on President Muhammad Buhari to intervene.

The protesters who barricaded the only major high way that leads  to Yola, the state capital were holding placards with inscriptions such as “Kidnappers on a rampage in Girei “; “Government should come to our aid” and “Give us security in Girei.”

Saidu Hamman Girei  a youth leader, and sarkin matasa Girei decried that “Our people are being kidnapped on a daily basis; some of the residents have fled their homes for fear of being kidnapped.

“Over ten people were recently killed by kidnappers here in Girei town, they carted away with our money over N70 million, we do sleep with two eyes opened for fear of uncertainty because of the menace of kidnappers .

‘’ Despite by this, our elders and traditional leaders met to discuss way forward; so youths were ordered to 24 hours patrol, which we started it day and night with assurance to help police with useful information that could help in tracking down kidnappers and other criminals; because we suspected that the criminals are in our midst and others are hiding in outskirts.

‘’In fact, when we started it, the giant stride has yielded positive results; and we had nabbed some suspects with their ammunition,  guns and other incriminating items in their houses or hideouts.

‘’ Among those arrested there is one who told us that he is a kidnapper and he listed about nine or ten of his accomplices. We took him, to where the others were hiding.

‘’But to our greatest shocked and surprise, minutes after handing over the suspects to police, an order from the above came that they should be released with immediate effect.

‘’ So, a development spurred protests in the town as we can see now,’’ said he.

Also corroborating another resident Baba Mallum Girei said,  ‘’People are tired of this doubles faced by security echelons, why and this is not the first time suspects are being released.

‘’We want President Buhari to look seriously on the increasing cases of kidnappings as it portraits that the government or some people in the government are benefitting from the crimes,’’ said Mallum Girei.

Lamenting on the ever-increasing rate of kidnappings in the recent time, Dr Tounde Elijah, the chairman Nigerian Medical Association (NMA), in the state said, “The alarming rate of kidnappings in the state really calls for concern; from simple menial jobbers, the water vendors, to politicians, entrepreneurs, now other professionals, university dons and medical doctors are also joined in the casualty list.

“It’s becoming unbearable and intolerable. We’re contemplating staging a peaceful march against the spate of kidnappings in the state that will involve the entire stakeholders in the health sector. Other professionals can be factored in,” the NMA chairman said.

When contacted on the protest,  police spokesman in the state DSP Suleiman Nguroje, said that the state police command had deployed its men to restore peace.
Nguroje denied that suspects were been released by police, ” This is blatant lies, police are professional and professionalism and laws have to be followed.

” No suspect is released, due process and investigation have to be followed which some people didn’t know.

“The Girei suspects are still in police custody being investigated, and I don’t know they got such wrong and false information that there was a plan to release the suspects,” said he.

‘’ Lets people not take laws unto their hands, and if there is any grievance or complaint they resort to right channels and in everything, there are stipulated rules and guidelines.”

In the meantime, both the council chairman of Girei, the DPO, DSS representative and other community leaders had met with the state commissioner of police Audu Madaki during which they held a closed-door meeting, while the kidnap suspects were rushed to the police headquarters.

Naija News recalls that residents of Adamawa are now sleeping with their two eyes opened as kidnappers make brisk business.