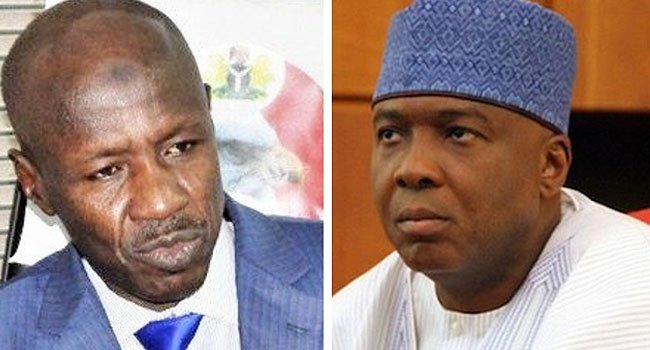 Nigeria’s former senate president Dr. Bukola Saraki has described the order given for the forfeiture of his property in Ilorin, Kwara state capital, as an abuse of the court process and a violation of a subsisting order of the federal high court in Abuja.

A federal high court in Lagos had ordered the forfeiture of two houses of Saraki in Ilorin based on an application filed by the Economic and Financial Crimes Commission (EFCC).

In a statement on Monday, Yusuph Olaniyonu, his special adviser on media and publicity, alleged that the claim that the property were built with the proceed of fraud is false.

“The EFCC’s claim that the Ilorin property was built by any proceeds of fraud is outrightly false. The fact is that the Ilorin property was built partly by the Kwara State Government pursuant to the Third Schedule of the Governor and Deputy Governor (Payment of Pension) Law 2010 while Dr. Saraki personally funded the remaining cost of the building,” the statement read.

He also expressed surprise that the EFCC could not even hide its penchant for abusing the nation’s judicial institution as it engaged in forum shopping when it filed a suit in Lagos on a property situated in Ilorin.

Naija News recalls that the former senator had earlier cried out over the seizure of his one billion naira property located at 1, Abdulkadir street, G.R.A, Ilorin, Kwara State on the grounds that it was acquired through the proceeds of unlawful activity by the main anti-graft agency  (EFCC).