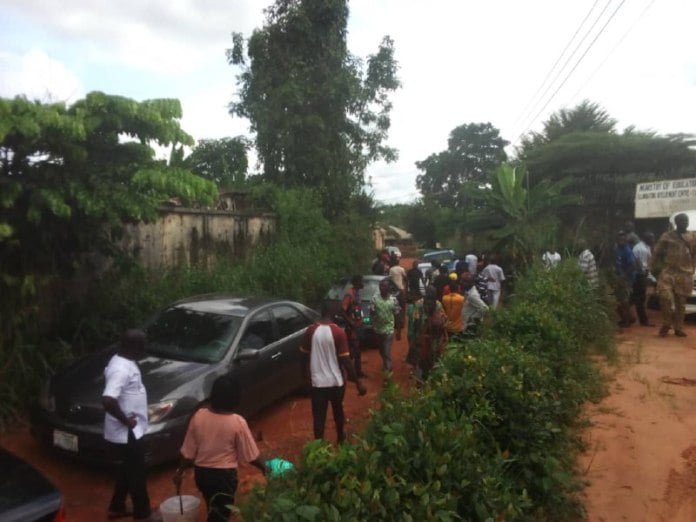 Naija News understands that the tipper drivers blocked the road and preventing judicial officers of both the magistrate and customary courts from going out of their offices after the close of work.

This comes after the drivers had protested the detention of their president, Chief Davison Ebuka and four chairmen for reportedly standing against the payment of levies imposed by the government.

The tipper drivers alleged that the state government was charging them N1,400 for 12 cubics of tipper sand and N700 for 6 cubic tippers per trip, which they described as high and obnoxious and so their leaders had since initiated an opposition against the charges.

While speaking on the matter, the deputy president of the Association, C.C. Udenwa Ezekwesili, said the imposition of N1400 and N700 taxation on them by the state government was unacceptable.

“We did not say we are not going to pay but we cannot pay such amount after we paid to the federal government. Above all, we had obtained a court judgement in our favour at the federal high court Awka, which no court had vacated. We don’t know why the government is harassing us by using police and court to detain our members,” he lamented.

This online news platform gathered that the Deputy President of the association said they have been occupying the court premises for four days, urging the magistrate to release their president who has been detained by the order of the court in the last ten days.

“We met the bail condition and our chairman was released, few minutes into his release, he was rearrested and we don’t know why,” he said.

He, therefore, called for the immediate release of their leader and members who had been in detention and went ahead to also appealed to the state governor, Willie Obiano to quickly intervene in the crisis.