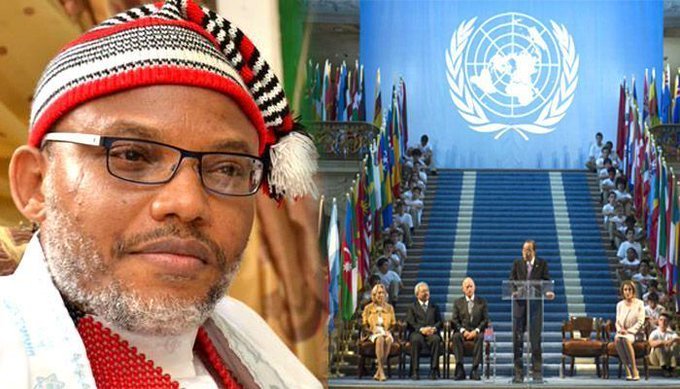 The leader of the outlawed Indigenous People of Biafra (IPOB), Nnamdi Kanu, went missing at the 74th session of the UN General Assembly (UNGA74) which opened on September 17, 2019.

Naija News recalls that a statement issued by IPOB Media and Publicity Secretary, Emma Powerful, last week Monday, had said the IPOB leader will lead the “Biafra delegation” to the UNGA74.

The IPOB spokesman had said that the pro-Biafra group had “both direct and indirect representations” at the UNGA74, adding that members of the group were on the ground.

“Regarding the United Nations General Assembly meeting in New York, we have both direct and indirect representations for the forthcoming events in the US. Our people are on the ground.

“If the right conditions which we are waiting for are put in place, our leader will personally lead our people; otherwise it would be on a later date which would be duly announced,” the IPOB spokesman had said in a statement made available to journalists in Onitsha, Anambra State, Southeast Nigeria.

However, during the 74th session of the UNGA, Kanu was not spotted at the event, raising questions if the “right conditions” which the IPOB spokesman had said would be the criteria for Kanu to “personally” lead members of the group to the UNGA74 were not provided.