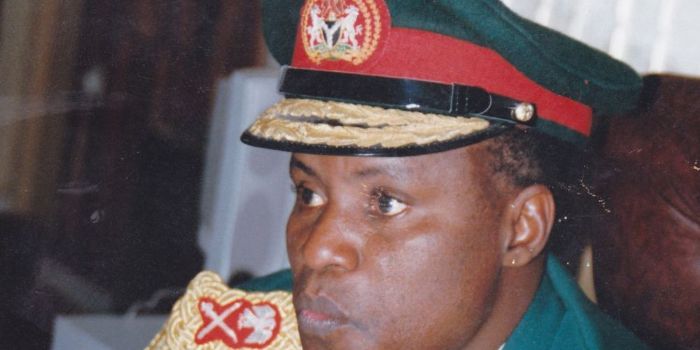 Nigerians have berated the appointment of Bashir Magashi as Minister of Defence despite his involvement in the stealing of $550, 000 public funds in 2006.

Naija News recalls that the newly appointed minister of defense for Nigeria, was dragged into the muddy waters of his past after a revelation showed how the former military governor of Sokoto State abused the public trust by stealing and shipping abroad not less than $550,000 while in service as the Commandant of the Nigerian Defence Academy, Kaduna in 1998.

Reacting to the revelation, some Nigerians on Twitter condemned the President Muhammadu Buhari administration for selecting Magashi as a minister.

Here are some reactions as follows:

According to @PremiumTimesng, Bashir Magashi, was involved in the looting of Nigeria during the Abacha regime to the tune of not less than $550,000 while in service. |https://t.co/EWaVEZiuUd
Is President @MBuhari aware?#KnowYourMinisters#2ndTermCabinet pic.twitter.com/UvPAIMtiWu

Premium Times is proving to be more “investigative” in digging out the offensive secrets of our public officials than the very DSS tasked with such responsibility. They dug out Kemi Adesoun’s certificate forgery, and now General Bashir Magashi’s role as a part of the Abacha loot.

Please Sir don't say the DSS don't know, they know but won't do anything, until he decamps to another party. By that way has our Mr integrity admitted that Abacha looted this country?

All these replies "don't you think DSS knows"? I don't get it, I'd they "know and never did anything about it, the "knowing" is useless. Are the DSS not supposed to investigate any nominee a d recommend if they are fit and suitable to occupy the position they are going for?

I thought ministerial designates go through security screening? Seems DSS/EFCC looked the other way in this case. Once nominated by bubu, the candidate becomes clean (read Akpabio, Akume etc).

Dss is biased, they have always been serving the president not the people as they are supposed to

Bashir Magashi the current minister of defence was the mole reporting every activity to Abacha when the Diya "alleged" coup was being planned.

"But that man — #BashirMagashi, a retired army major general — who got away with a slap on the wrist after stealing and shipping abroad not less than $550,000 while in service, has now bounced back, emerging one of the country’s most powerful ministers." https://t.co/BDtNEtHDoD