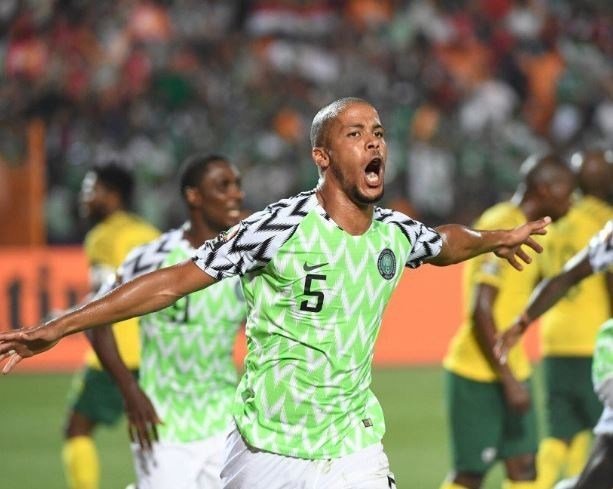 The Super Eagles of Nigeria on Wednesday beat the Bafana Bafana of South Africa 2-1 to qualify for the Semi-Finals of the ongoing Africa Cup of Nations (AFCON).

Nigeria will now face either Algeria or Ivory Coast after their hard-fought victory over Baxter’s team at the Cairo International Stadium.

Ahead of today’s game the Super Eagles head coach Gernot Rohr had disclosed that he will make defensive changes against South Africa.

He certainly did, with the introduction of left-back Jamilu Collins for Torino’s right back Ola Aina.

There was also no place for Moses Simon, who had t make way for Villareal’s Samuel Chukwueze.

Fresh from a stunning 1-0 victory over hosts Egypt, Bafana were looking to send three-time African champions out of the competition in the form of the Super Eagles.

But Samuel Chukwueze scored the opener with a cool finish beyond goalkeeper Ronwen Williams in the 27th minute to put a dent the South Africa’s hope for a winner.

Alex Iwobi beat his marker and spotted Chukwueze. The winger’s initial effort was deflected to his path and he applied the finishing touch.

It took the intervention of VAR to award the goal to Zungu.

The killer punch was delivered in the 89th minute by William Troost-Ekong.

He poked the ball to the net after Ronwen Williams failed to deal with a left-sided corner.