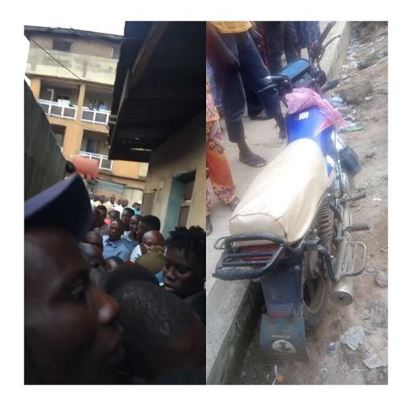 A middleaged bike rider in Lagos simply identified as Ahmed on Tuesday took his own life after battling series of debts.

Naija News understands that the bike rider who is reported to be popular in the Agege area of Lagos, took his life when he returned from work where he had gone to transport his passengers.

Ahmed was found dangling below the ceiling fan in his room. He was said to have hung himself after he returned from work.

An eyewitness in the area who requested anonymity told Naija News that Ahmed committed suicide in his home where he lives with his three children and wife on Shoretire street in Agege.

The eyewitness revealed that Ahmed must have taken his life due to the financial mess he had been swimming in as he was said to be owing bebts and couldn’t pay up due to his low and pitiable financial state.

The eyewitness said that Ahmed could barely feed his family; the eyewitness attributed that as the main reason for Ahmed’s frustration that eventually led to his death.