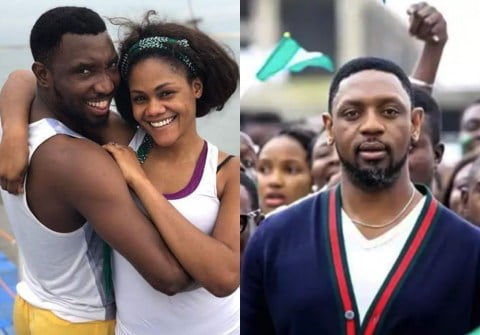 Nigeria singer and songwriter, Timi Dakolo has thrown his weight behind his wife’s allegation that she was once raped by Pastor Biodun Fatoyinbo, the founder of The Commonwealth of Zion Assembly (COZA).

Naija News reports that Busola Dakolo in a video that surfaced online on Friday, June 28, revealed that she was raped by Pastor Biodun Fatoyinbo when she was still a member of the church as a secondary school student under 18.

She said the rape had occurred in her family house, very early in the morning while her parents were away.

She revealed that the COZA senior Pastor had promised to comfort her at a time she was struggling with her family, but alleged that the Pastor turned out to be the one to deflower her through rape even while the Pastor was married to his present wife and also a child.

While reacting to the allegation, Timi Dakolo said that the time was right and his wife has been silent for a long time.

He said; “even if you are a minority of one; the truth is still the truth.”

CHRISTAINITY IS TELLING THE TRUTH EVERYONE IS AFRAID OF TELLING.. EVERYTHING ELSE IS RELIGION..#UNCHAINED #truth #unbroken