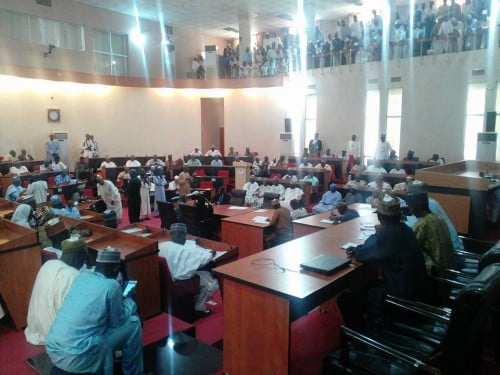 Nigerians earlier today were confronted with another melodrama from Bauchi state lawmakers as two separate individuals were elected as the speaker in two different elections.

Naija News recalls the weird actions by the lawmakers started earlier today when the eleven out of the 31 elected members of the Assembly sat as early as 7:00 am and elected Abubakar Suleiman as the Speaker of the House.

Suleiman is a member representing Ningi Central Constituency and a member of the All Progressives Congress (APC).

Danlami Kawule a member of the Peoples Democratic Party (PDP) representing Zungur/Galambi was also elected as the Deputy Speaker by the same group of lawmakers.

The situation took a twist as 18 members of House held a parallel election in front of the Assembly complex around 11:00 am.

The members stood in front of the statue of the Mace symbol and elected Kawuwa Damina as the Speaker of the House.

Damina is a former Speaker in the 8th house of Assembly and a member of the APC. He was returned in the parallel election through a voice vote.