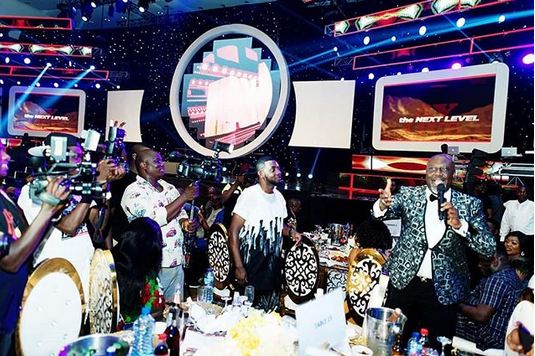 The senator representing Kogi West at the Nigerian Senate, Dino Melaye, over the weekend, turned into a musician at AY Live, a comedy show.

Naija News reports that AY Live took place at Eko Hotel and Suites on Sunday with the senator and other dignitaries in attendance.

This online news platform understands that the Kogi West lawmaker is known for releasing songs to “attack” his “supposed enemies” which includes his state governor, Yahaya Bello.

During the show, Ayo Makun, the host, approached Senator Melaye and requested that he should sing his popular song “Aje kun iya ni’oje.”

Senator Melaye accepted and sand the song in a fashionable way to the excitement of the audience.

Meanwhile, Senator Melaye released “Aje kun iya ni’oje” in March 2017 shortly after he appeared before the Senate committee on ethics and privileges over his certificate controversy.

After sitting for a while, Melaye stands to continue his song. He ends by taunting his opponent.