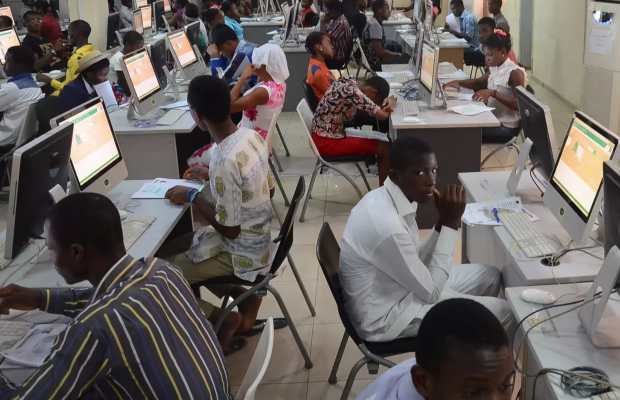 The Joint Admissions and Matriculation Board (JAMB) has revealed that about 390 blind candidates are among the over 1.8 million candidates taking this year’s Unified Tertiary Matriculation Examination (UTME).

The Nation reports that the UTME for the visually impaired, which is taking place in four centres, started on Tuesday and will be concluded today, Wednesday, April 17.

The Chairman, Equal Opportunity Group of JAMB, Prof. Peter Okebukola, made the disclosure to the News Agency of Nigeria (NAN) today at one of the venues of the examination at the University of Lagos.

According to him the candidates were sitting for the examination in Abuja, Enugu, Kano and Lagos centres.

It is understood that the Equal Opportunity Group is made up of senior academics, including experts in special education and other relevant stakeholders.

A breakdown of figures of the visually challenged candidates that were sitting for the examination in the four centres across the country as given by Okebukola include 57 candidates who wrote the examination at the Abuja centre, 59 others were slated to write at Enugu, 135 at Kano and 139 others in Lagos.

He noted that the subjects the candidates were examined on during the two-day examination included Agricultural Education, Arabic, Biology, Chemistry, Christian Religious Knowledge, Civic Education and Commerce.

Okebukola added that Music, Physics, Use of English and Yoruba completed the number of subjects.

“The goal of the Prof. Is-shaq Oloyede-led JAMB is to ensure that no Nigerian who is eligible is prevented from taking the UTME regardless of any disability.

“The JAMB boss holds the firm view that we must have a level playing field for all candidates.

“As long as the candidate is intellectually capable and meets the minimum conditions for admission in the university of choice, he or she should have a good chance of placement into any university,” he told NAN.

Okebukola who is a former National Universities Commission (NUC)’s Executive Secretary, added that this initiative by the board has been cited in the last two years in several countries as a good model for Africa.

“So far, a respectable number of blind candidates processed through the JAMB Equal Opportunity Group have secured admission into Federal, State and Private Universities, Polytechnics and Colleges of Education,’’ he said.

According to Okebukola, the candidates were still taking the examination through the dictation mode because the board was preparing and getting them familiarised with the mode of administering lectures in tertiary institutions.

“We know where these persons are going to and so, we also want to assist them by ensuring that they get exposed to what awaits them ahead.

“That being said, we have also been working towards migrating to their own kind of Computer Based Test (CBT) in a year or two.

“We are currently test running the software on this platform but I can assure you that in another year or two, we will fully migrate,” Okebukola told NAN.

Mrs Chioma Ohakwe, Proprietress, Bethesda Home for the Blind, Mushin in Lagos, said that the home presented of 25 candidates for this year’s examination.

She said she was optimistic that her candidates would post impressive performance as the home had placed the candidates under intensive teaching, monitoring and supervision.

“Infact, we had to hire eight new experts to handle and prepare these candidates.

“We have been preparing them for this examination in the past one year.

“We hired six professional teachers to coach them for this examination, one for just braille and another for computer, bringing the total of the new teachers to eight.

“So, it is my expectation that they will post a better performance compared to their colleagues who sat for the examination in 2018,” Ohakwe said,

Mrs Ohakwe further urged the board to fast track efforts in putting in place the CBT mode for the candidates, adding that they had complained of their inability to understand and get the words dictated clearly.

Also, she said the candidates had lamented that it did not give them enough time to think before answering the questions.

Meanwhile, Naija News understands that as the UTME exercise ends today parents and candidates, especially in Anambra, Akwa-Ibom States among others have expressed their dissatisfaction at the way and manner the exam was conducted.