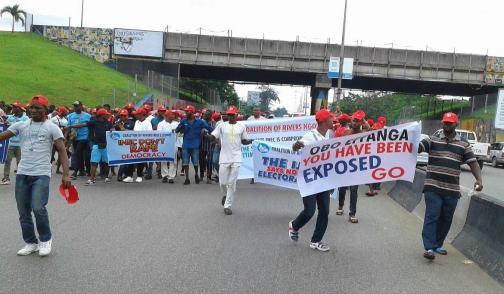 Protesters have taken to the streets of Rivers in two separate protests over the leading of Governor Nyesome Wike in the 8 results collated so far by the Independent National Electoral Commission (INEC).

The collation exercise in the state is being superintendent by the state INEC Returning Officer, Professor Teddy Arias.

Below are some of the results declared so far by INEC:

There are 10 wards in Omuma. Votes were cancelled in 28 polling units across 8 wards.

Meanwhile, the results announced so far seems not to go down well with the electorates in the state as some protesters protests rocked the state, following the resumption of collation of the governorship results by INEC.

The protesters were for the resumption and those against the collation exercise.

An elder statesman and a Kalabari chief Anabs Sara-Igbe, led those against the collation exercise. They converged at the Airforce junction on Aba/Port Harcourt Expressway and marched towards Hotel Presidential Axis before they were dispersed by armed policemen who shot sporadically into the air to dispersed them at Elelenwo Street.

Before they were dispersed, Anabs Sara-Igbe had criticised INEC’s insincerely.

In his words, Anabs Sara-Igbe said; “INEC had told Rivers, people, that it suspended the electoral process because of alleged violence. But some weeks after, the same INEC suddenly surfaced with results from 17 local government areas. Where did INEC get the results for which Governor Wike and PDP are the only ones who are privy of it. Were the results kept in Government House?”

Similarly, another group of protesters who are mainly PDP women simultaneously gathered at the Port Harcourt Polo Club to support the resumption of the collation exercise.

They said they will remain peaceful but would challenge anybody that would disrupt the long-awaited collation of results.

The state Commissioner for Information and Communication Emma Okah, had on Monday announced that the state Government would arrest anyone found on the streets to protest the resumption of collation.