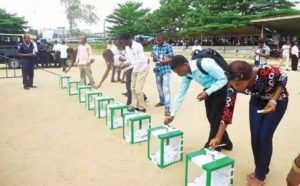 Unit 4 of Ogbomoso South Local Government Area of Oyo State, was today attacked by suspected hoodlums who carted away thumb-printed ballot papers in all the units in the area.

Olamide Adewale, who made a distress call to The punch, said, “Hoodlums armed to the teeth just invaded unit 4A in Oke Ola farm settlement here in Ogbomoso South local government and forcefully ferried away all the ballot boxes en route Ogbomoso/Oyo road. They went in Oyo direction,” he said.

Reports also revealed that the ballot boxes at Ward 3 Unit 3 in Ibadan Northwest were snatched in the presence of security agents around 2pm.