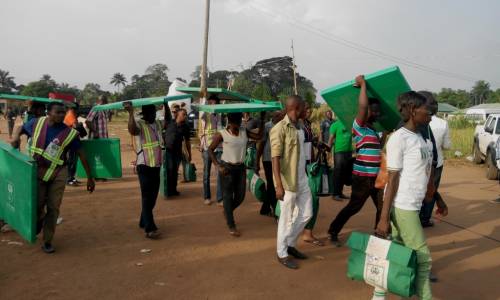 Eighteen National Youth Service Corps (NYSC) who were employed by the Independent National Electoral Commission (INEC) during the Saturday elections have been kidnapped in Akwa Ibom state.

Mike Igini, resident electoral commissioner (REC), disclosed this while fielding questions from journalists in his office.

He said 10 of the corps members were abducted at Abak local government area (LGA), four in Itu LGA and another four.

Igini hinted that some of the kidnapped corps members had been rescued following intervention by security operatives.

Igini said Kufre Etuk, a lecturer of the University of Uyo, was brutalized in Uruan LGA. He was said to spent the night in the bush after escaping from his attackers..

He said in Ikono LGA, materials for 10 out of 11 wards in the area were smashed and destroyed by political thugs.

“In places where there are issues of ballot boxes snatching, there will be no result from those areas. No result can emanate from any polling unit with issues of stuffing of ballots and snatching,” he said.

“In view of all negative reports of violence, fraudulent and forceful results, abductions of poll staff, ballot box snatching among others, due and diligent attention must be given to the filling of Form 40G series,” he told them via a statement.

“This means that constantly, EOs must insist on taking all field reports made and captured by the Commission Electoral Operations Support Centre (EOSC) of snatched results sheets and ballot.

“No results can emanate from polling units, wards and LGAs where there had been previous reports of serious violent attacks of poll officials many of whom are still being rescued particularly corps members and snatching of results and ballot papers taken to unknown places.”

In Ogun, some INEC officials conveying election results from Ipokia to Orona town hall were ambushed. They were in possession of results of national assembly elections when the attackers struck.

Some of the electoral officials had to be taken to the hospital.