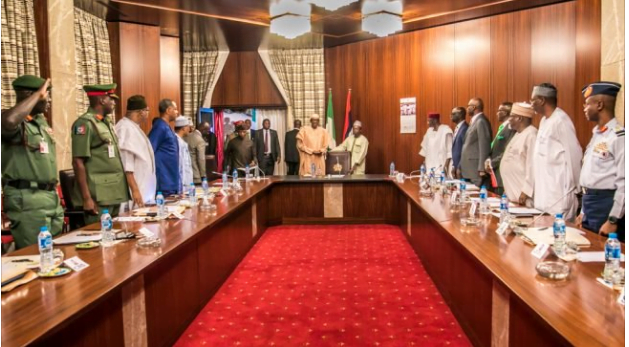 President Muhammadu Buhari is currently holding an emergency security meeting with service chiefs, some Ministers and governors of selected states.

The meeting, which commenced at about 11 am, is holding at the President’s office in the Presidential Villa in Abuja, Nigeria’s capital.

Naija News understands that the governors in attendance are Nasir el-Rufai of Kaduna State, Kashim Shettima of Borno and Jubrilla Bindow of Adamawa.

Also in attendance at the meeting are the Secretary to the Government of the Federation, Boss Mustapha, Interior Minister, Abdulrahman Dambazau and Minister of Defence, Mansur Dan-Ali.

Others are the Director-General for the National Intelligence Agency (NIA), Ahmed Abubakar and Director General of the Department of State Services, Yusuf Magaji Bichi.

This online news platform reports that the meeting is coming at the Governor el-Rufai is battling the current killings in communities in Kajuru Local Government Area of Kaduna State where at least 66 people were reportedly killed recently.

No less than least six soldiers and two Boko Haram insurgents were reported to have lost their lives in the wake of one of the attacks.

Attacks by the insurgents were reported in a civilian neighbourhood in Maiduguri, the Borno State capital, northern Nigeria, where three Boko Haram suicide bombers and a gunman were left dead.

Naija News reports that the terrorists out these attacks on the day Nigerians were supposed to vote in presidential and parliamentary elections. Hours before the elections were to commence, the Independent National Electoral Commission (INEC) postponed it by one week citing logistics challenges as its reason.