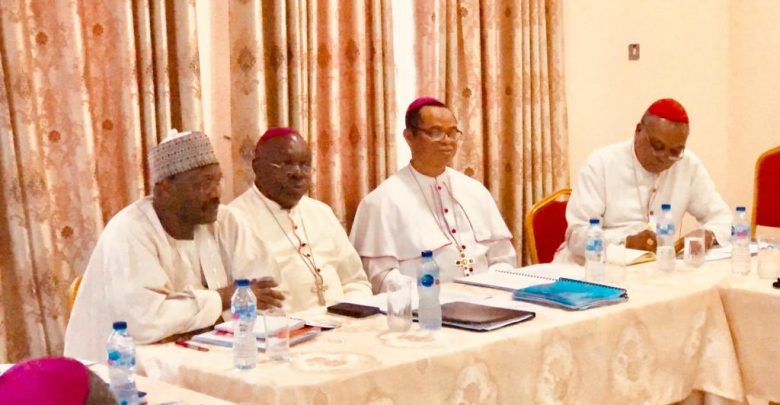 The Independent National Electoral Commission (INEC) has assured the Administrative Board of the Catholic Bishops, on the commission’s readiness to conduct free, fair and credible 2019 general elections.

The chairman, of the electoral commission, Mahmood Yakubu gave the assurance while speaking in an interactive meeting with the Catholic Bishops on Wednesday, February 6.

Mahmood Yakubu said that measures are already in place to ensure that Nigeria records a safe, free and fair election which is slated to hold on February 16 and March 2.

While responding to questions from journalists, Mahmood Yakubu debunked reports making the rounds on the alleged restriction of the recruitment of Collation and Returning Officers for the elections to some parts of the country.

He also argued that cleaning the Voters’ Register was not the INEC’s duty alone. He said that while the law requires the Commission to paste the Register at each polling units nationwide, it is also a duty for Nigerians and political parties to also draw the Commission’s attention to the names of ineligible persons for rectification.

In his own words, Yakubu said; “We have been doing so consistently. After the last one, we received only a few comments from the states, I think 48,000 out of 84 million registered voters. Part of the difficulty is that we are very careful if someone says that one person is dead, because of the experience the Commission had in 2015.

“We received a letter from one particular political party that a candidate was dead and they submitted a Death Certificate obtained from a government hospital. They also went to court, swore to an affidavit and his family also attested to the fact that the candidate was dead. They filed all these documents at the Commission. A week later, the supposedly dead candidate turned up and said he was alive.”

On the National Collation Centre, Professor Yakubu said; “What is a Situation Room? It is a place where we have our social media platforms, call centres where we take calls to listen to complaints people might have, details of the situation on the field and so on. It is a very boring place.

“Since the perception is that we might be up to something, which is why (according to the narratives), the Commission is unwilling to open up the place, we have decided to open up the situation room. We will give visitation rights.

“The Chairman of INEC is the Chief Returning Officer for the Presidential Election and I am not going to share that responsibility with anyone.”