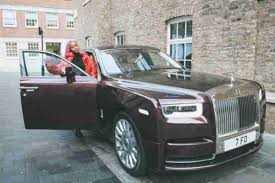 The 26-year-old  daughter of billionaire Femi Otedola, took to her Instagram handle @cuppymusic to announce, with a picture of the car.

“After a 13-month wait, finally picked up my new specially built order! Florence Ote #NewYearNewRide.’’
Cuppy, who is also a producer won Best Female DJ at the 2015 Nigerian Entertainment Award.

The Green Light crooner also collaborated with artists such as Tekno, Sarkodie in `Vybe,’ `Currency’ where she featured L.A.X, `Werk’ featuring Skuki and `Charge Up’ with MasterKraft.

DJ Cuppy also enjoys being the ambassador for some popular brands.