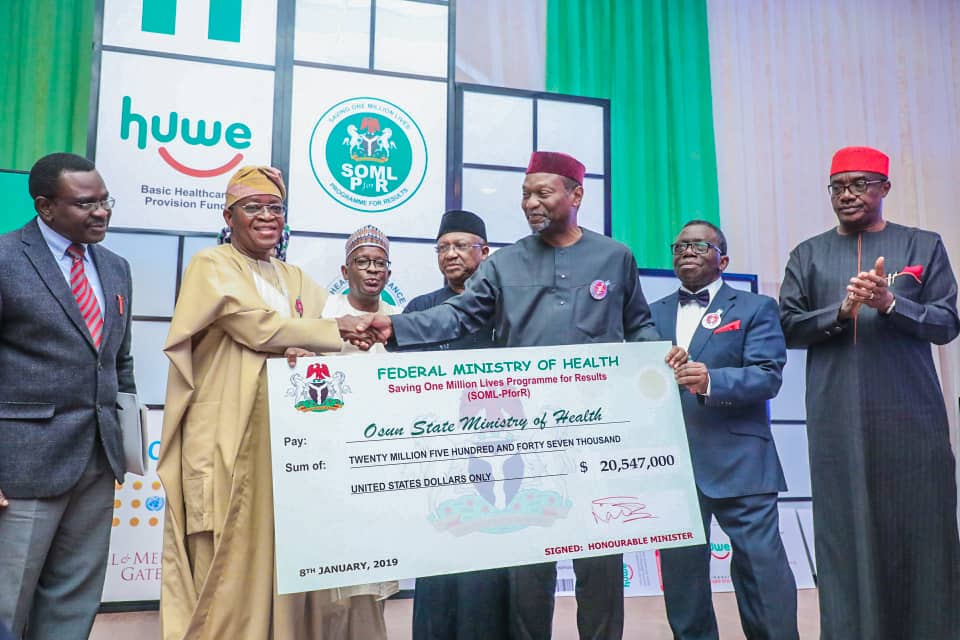 President Muhammadu Buhari  has launched the 2nd National Strategic Health Development Plan (2018-2022) and the first phase of the roll out of the N55 Billion Basic Health Care Provision Fund in six states and the Federal Capital Territory.

Naija News learnt that the president, who was represented on the occasion by the Minister of Budget and National Planning, Sen. Udoma Udo Udoma, pledged to fulfill the campaign promises he made to Nigerians in 2015.

Speaking at the event to launch the plan in Abuja yesterday, President Buhari also expressed his commitment to fulfill all his campaign promises.

The president said: “The first phase of the rollout of the basic healthcare provision fund is what we are launching here today in the six states and the FCT.

“All other states would benefit from the fund as they fulfil the laid down criteria for accessing the fund.

“Let me state clearly that providing the policy for affordable healthcare to our citizens is in alignment with the agenda of our great party, the All Progressives Congress.

“We promise to provide succour to the poor at the same time providing for all other segments of the society.”

He described as unacceptable, the situation where out-of-pocket payment for health constituted over 70 per cent of the total health expenditure in Nigeria, saying that his administration was determined to reverse the trend.

He said, “I’m aware that out-of-pocket payment for health constitutes over 70 per cent of total health expenditure in Nigeria.“Our vision is to reverse this situation and promote shared prosperity.”

He said that government’s efforts at revitalizing the primary healthcare centres in the country was to ensure the delivery of quality basic healthcare service to a majority of Nigerians, irrespective of their locations.

“We shall focus more on the people living in the rural areas and the vulnerable population in our society, such as women, children under five years of age and the elderly.”

He said that the task would be pursued in collaboration with national and international partners.

“It is my hope that with the provision of quality healthcare to our people, our citizens will be healthy and more productive,” the president said.

Governor @GboyegaOyetola of the @StateofOsun joins other dignitaries at d Presidential Launch of d Second National Strategic Health Development Plan,
The Roll out of the implementation of the Basic Health Care Provision Fund and the disbursement of fund to high performing state pic.twitter.com/lsWPf3xG7o

Governor @GboyegaOyetola of the @StateofOsun joins other dignitaries at d Presidential Launch of d Second National Strategic Health Development Plan,
The Roll out of the implementation of the Basic Health Care Provision Fund and the disbursement of fund to high performing state pic.twitter.com/lsWPf3xG7o

The Minister of Health, Prof. Isaac Adewole, said that the Buhari-led administration had recorded significant progress in the nation’s health sector.

Adewole lauded the Development Partners for their support and assistance in enhancing healthcare facilities in Nigeria.

In their separate goodwill messages, some of the development partners, including UNICEF, DFID, USAID, Bill and Melinda Gate Foundation, World Bank and Dangote Foundation, pledged their continued support to help Nigeria achieve its universal healthcare goals.

Naija News learnt that the president later presented cheques to best performing states and the Federal Capital Territory (FCT) in the health sector.

Yobe state received the best award in the performance category, while Kano, Adamawa, Nasarawa, Borno, Osun and FCT were also recognised for their impressive performances in the healthcare delivery system.