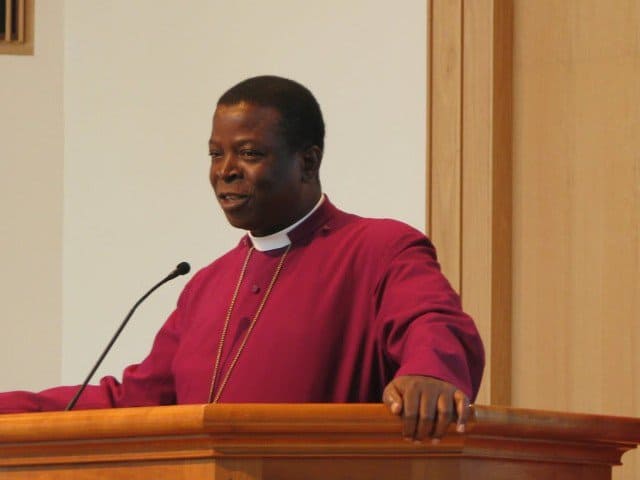 Ahead of the 2019 general election, the Primate of the Church of Nigeria, Anglican Communion, Nicholas Okoh, on Thursday called on President Muhammadu Buhari to sign the Electoral Bill into law.

He urged Nigerians making provocative statements to be careful not to set the country on fire.

“They should not set us in conflict with ourselves because if you look at it, most statements are made from the point of self advancement. They calculated that their own chances are slim and limited and they begin to talk. So, we appeal to everyone, whatever is your position, speak in such a way that there will be a country because if there is a country, all of us will be in good condition. But if there is no country, everybody will scatter and it is not in the interest of anyone”, he advised.

Okoh who spoke during a programme with the theme, ‘A day with the Primate,’ attended by the Governor of Ondo State, Rotimi Akeredolu (SAN), called on Christians in politics to show good example.

The Ondo State Governor however refused to comment on the refusal of the President to assent to the electoral bill.

“Electoral bill is not something for discussion in this place (church). We are here for the purpose of religion and the Anglican Church,” the governor said.

But Okoh said, “Definitely, people want the Electoral Bill signed, people have been asking for it to be done. But I don’t know whether they are in the majority or minority. If we are going to have an election, I think the President should sign it.”

While reacting to a question on why politicians use the church as platform to play politics, especially during election periods, he said Anglican Church would not give politicians the opportunity to mount the pulpit to make ungodly comments.

“In the Anglican Diocese, we don’t give any opportunity to politicians in the church. It could happen elsewhere but not in the Anglican Church. The pulpit is dedicated to preaching the word of God, not for politics or for criticising a friend or enemy. Anybody surrendering his pulpit for political campaign is doing the wrong thing,” the cleric stated.

According to him, the Anglican Church decided to summon its members who are regarded as stakeholders to discuss issues of the country and the church.

Okoh said, “Certain quarters in the church have been making statements which have been calculated to be embarrassing to the church. We shouldn’t allow such a thing to continue.