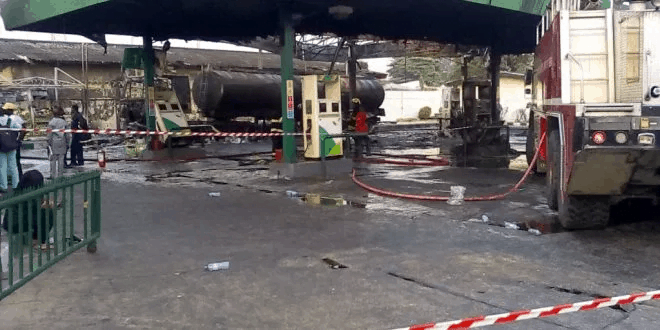 There has been a fire outbreak at the Forte Oil petrol station besides the Domestic Police Station, Murtala Muhammed Airport, Lagos state

The incident which triggered anxiety among passengers, motorists and passersby along the busy Ikeja-Airport Road started about 2pm yesterday, Naija News learnt.

Thick smoke billowing from the petrol station filled the skyline occasioning heavily vehicular movement along the Airport Road. Scores of road users took to their heels to avoid being caught in possible conflagration as the huge flakes of smoke was seen as far as the Mafoloku axis of the Airport Road and other parts of the metropolis.

But as at the time of writing this report ,the cause of the fire was still unknown.

An eye witness said the fire started about 2.10pm

He added that already fire fighters from both the Federal Airports Authority of Nigeria (FAAN) and Lagos State Fire Service battled to put the fire under control.

As at 2.300pm thick smoke was still coming out from the burnt petrol station and it also enveloped the area where the filling station is located