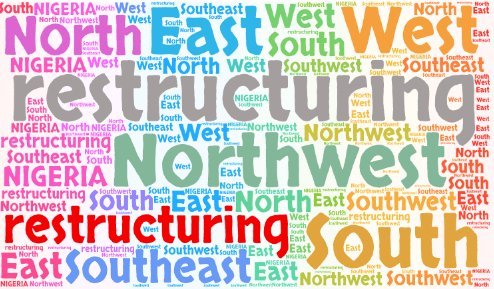 Nigerian Nobel Laurate, Wole Soyinka, the leader of the Ohaneze Ndigbo, John Nwodo, and the Yoruba socio-cultural group, Afenifere, have called for the immediate restructuring of the nation.

ON RESTRUCTURING
“A methodological way of stopping the bloodbath in the country is to reconfigure the nation. And nobody has the right, either through body language or any other means, to say no.” – Soyinka #Repair9ja #LNCquote pic.twitter.com/I099kyZe6H

Naija News learnt that the groups said this at a programme titled ‘Handshake Across Nigeria’ in Abuja,

Prof. Soyinka, in his keynote address, explained that as leaders of the country, they have been given a mission of carrying out the will of the people. He stressed the importance of restructuring the country with regards to insecurity and economic meltdown in the country.

He also said for a country blessed with abundant natural resources to realise its full potentials, states must be allowed to have maximum control of their resources, to allow them to set their priorities.

Mr Soyinka said the effects of playing religious card by the country’s leadership were grievous, adding that this has the potential to do incalculable damage to the unity of the country.

“When we talk about governance, we are talking about an instrument for the execution of the people’s policy. Insecurity has reached a certain level that even when we bring experts in, they wonder what exactly they have come to do.

“One way of stopping the bloodbath is to reconfigure the nation. States must be given maximum control over their resources. Those insisting on restructuring do so because they know that there is something wrong with the state of Nigeria.

“Many times, Nigerians have come together to proffer solutions and the way forward for the country, but after spending so much time and effort, nothing ever comes out of it. The recommendations are left to gather dust. How much longer shall we continue like this?” he said.

“It is time, you can’t do it individually; you have to come together and choose a representative. The change has to be authentic and sloganeering. So what we are looking is not a handshake across the nation but a handshake across history,” Mr Soyinka said.

He challenged the Nigerian youth to collectively transform governance in the country and hold on to what could bring developmental stride.

I want you to show me in that #Atikuplan where he mentioned Restructuring sir. https://t.co/L0kQvZFBv1

On his part, Mr Nwodo said those campaigning against restructuring in Nigeria have painted an unfortunate and untrue picture that those in support of restructuring are doing so in order to deny the northern states who do not yet have any proven oil reserves of the ability to survive.

“This is unfortunate. The new model we propose for Nigeria recognizes that revenue in the world today is promoted by two main sources namely, human capital development leveraging on technology to drive the critical sectors of the economy and agriculture.

Afenifere’s leader, Ayo Adebanjo, criticised the president, Muhammadu Buhari, and vice president, Yemi Osinbajo, for condemning restructuring. He insisted that restructuring was the best for the country to realise its full potentials, there was nothing confusing about it as being insinuated in some quarters.

There have been conflicting reports about restructuring the country.The vice president had in August, said that simple geographical restructuring is not the problem with Nigeria. He said prudent management of national resources and providing for the people properly were better ideas for Nigeria’s development challenges.

However, the presidential candidate for the People’s Democratic Party, Atiku Abubakar, said the Buhari-led administration has demonstrated a lack of appreciation of the core tenets of the concept. The duo are not the only ones with conflicting opinions about restructuring.