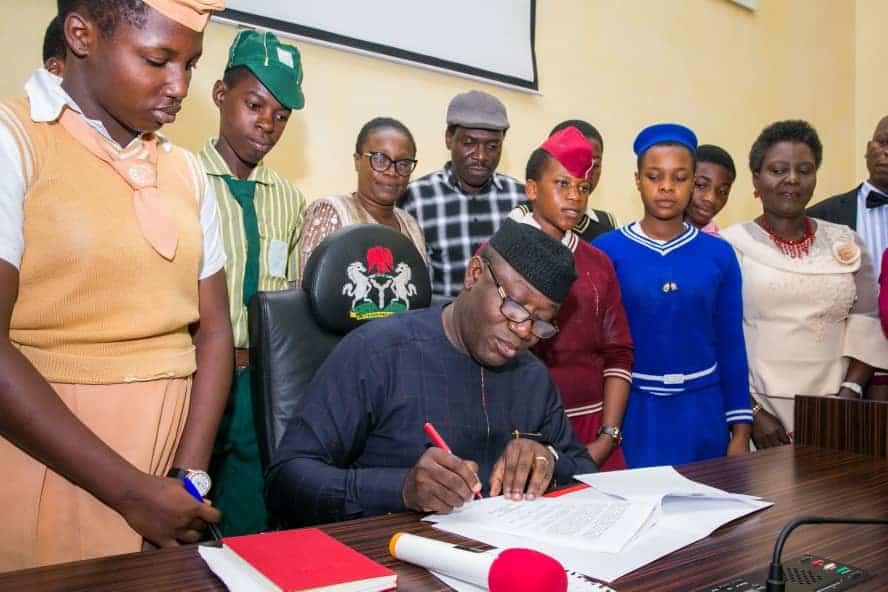 Ekiti state governor Kayode Fayemi has signed an executive order for free education to stop the payment of education development levy by students of government-owned schools in the state.

I just signed the executive order revoking education levies in primary and secondary schools in Ekiti State. Education is a priority for our children.#InvestinEducation pic.twitter.com/PtUx2arE0U

The Education Development Levy was introduced by his predecessor Ayodele Fayose in 2015.

The levy mandates payment of N500 and N1,000 for students of primary and secondary schools respectively.

Naija News recalls Fayemi, who spoke at town hall meetings in Ekiti North and Ekiti South Senatorial Districts after he was sworn in as the state governor, said he planned to scrap of the educational levy.

A week after his inauguration as state governor, Fayemi announced that payment of the education levy had been stopped.

“I just signed the executive order revoking education levies in primary and secondary schools in Ekiti State. Education is a priority for our children,” Fayemi tweeted.

Prior to this, the governor had condemned underage children paying levies when their parents were already paying taxes.

Towards improving the human development capital of our state – and providing full access to quality education for our children and younger generation – we revoked the existing levies imposed on primary and secondary education in Ekiti State.
~
Governor Kayode Fayemi pic.twitter.com/6L6kIpjyWX

Fayemi promised that the state government would not add to the burden of residents as a result of the harsh economy and unpaid salaries inherited by the last administration.

The governor also revealed plans by his government to commence a school feeding programme in all public schools by December.