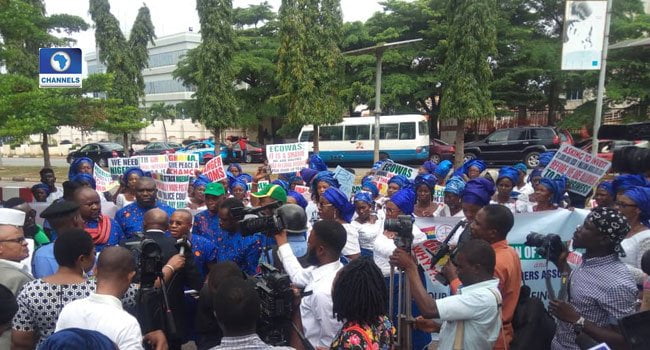 The Resumption of the executive secretary of the National Health Insurance Scheme (NHIS) Professor Usman Yusuf, to office has sparked protest by members of the Unions of the scheme.

The protests is coming after Yusuf was suspended indefinitely after being found wanting for gross corruption by the NHIS Governing Council.

The unions involved in the protest include the Association of Senior Civil Servants of Nigeria, Medical and Health Workers Union of Nigeria and Nigeria Civil Service Union.

The Chairman, Association of Senior Civil Servant of Nigeria, Mr Abdulrazak Omomaji, who spearheaded the protest in Abuja insisted that the secretary remained suspended.

“NHIS is guided and governed by an established Act with a constituted governing council, the council resolved using powers and available evidence of alleged corruption to suspend Yusuf.

“Presently there are a lot of allegations against him involving the 2018 budget crisis which include removal of the N264 million padding discovered in the budget.

“He engaged in nepotism in November 2016 by fraudulently awarding a contract to Lubekh Nigeria Limited for the training of NHIS staff members who were his relatives, among other allegations.

“He has been suspended, but if he insists on resuming work, then he will be scoring the present government very low in the fight against corruption.

“We stand against his resumption because he resumed with armed policemen and intimidated us,’’ he said.

On his part, Mr Olawuyi Kayode, the Chairman Medical and Health Workers Union of Nigeria, said the present government’s stand on integrity with zero tolerance for corruption.

However, Mr Mohammed Gajo, a Principal Manager and Chairman of Nigeria Civil Service Union, criticised the protest saying the executive secretary was working with a very articulate and robust plan to sanitise the scheme.

He added that the protest by the joint union was an indication that the members wanted to resist positive changes by the executive secretary.

“The ES has recovered a lot of money since his assumption of office; he remitted about N1.2 billion to the TSA account; he insisted that the Health Management Organisations paid back funds meant for health facilities.

“What is playing out today is that those benefiting from these funds and the past administration are fighting, causing crisis and resisting the positive change,’’ he said.

The Assistant General Manager, Planning, NHIS, Mr Abubakar Kurfi Mohammad, asserted that the suspension was carried out without paper evident by the governing council on the approval of the Minister of Health.

“We cannot work with words of mouth, this is a government establishment. There has to be proof of evidence on paper showing the Minister of Health’s approval for the suspension,

“The last time he was suspended, the president reinstated him because he was not found guilty of all the corruption allegations.

Naija News recalls that the General Secretary of the scheme was, on the 18th of October, suspended for alleged gross misconduct.