The Independent National Electoral Commission (INEC) has declared its stand on October 7 as the deadline for conduct of primaries for all elective positions for the 2019 general election.

Solomon Soyebi, INEC national commissioner and chairman, information and voter education committee, made this known yesterday in a statement made available to Naija News after the commission’s weekly meeting held in Abuja.

He added that among other things, the commission considered the status of political party primaries to elect candidates into various positions for the 2019 general election.

He said 89 of the 91 registered political parties that gave notice of their intentions to conduct primaries as required by the Electoral Act 2010 (as amended) had commenced and were at various stages of the process.

“INEC wishes to restate that the conduct of primaries and resolution of all disputes arising therefrom must be concluded on or before October 7 as earlier published in the Timetable and Schedule of Activities for the 2019 general election,” he said. 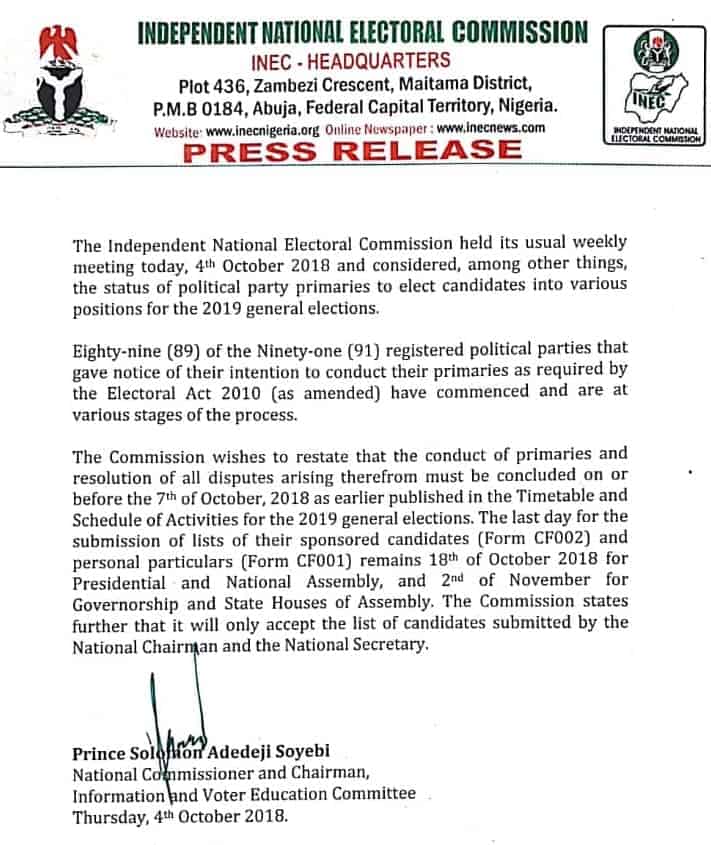 “The last day for submission of lists of sponsored candidates (Form CFOO2) and personal particulars (Form CF001) remains October 18 for Presidential and National Assembly and November 2 for Governorship and State Houses of Assembly.”

Soyebi said the commission would only accept list of candidates submitted by the national chairman and the national secretary.