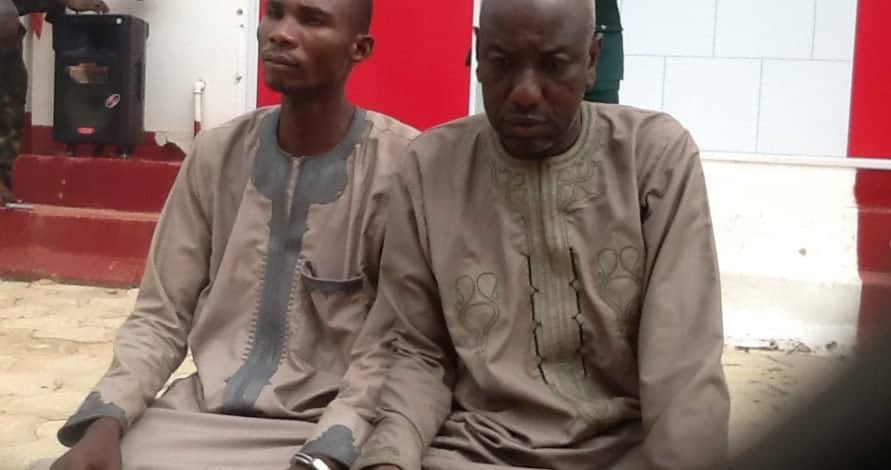 Two Suspected  recruitment racketeers have been paraded by the Nigerian Army for extorting potential recruits under the pretext to get them enlisted into the Depot Nigerian Army as recruits, and for also impersonating the Army.

Adeyemi disclosed that the suspects were among the recruitment racketeers arrested on July 29 around Chindit Countermen by the Depot’s Military Police.

“The attention of this noble institution has been drawn to activities of some fraudsters parading themselves in Zaria metropolis as military officers.

“These suspects indulged in defrauding unsuspecting potential recruits of their hard earned money.

“They use the social media and proxies to lure their victims to pay them money as inducement on the promise of assisting to get them recruited into the Nigerian Army,” the spokesman said.

The Spokesman credited the arrest of the suspects to the prompt action taking by the military when some of the defrauded victim raised alarm.

“The arrested suspects claimed to be working in collaboration with the duo of Abubakar Sadiq Musa and Lawal Bala Abdullahi whom they said paraded themselves to be military officers and lure unsuspecting victims for the syndicate.

“I want to state unequivocally that Abubakar Sadiq Musa and Lawal Bala Abdullahi who are currently at large were at no time officers of the Nigerian Army.

“The arrested suspects attested in their confessional statements to have so far defrauded no fewer than eight potential recruits to the tune of N1.3 million which was shared among themselves,” Adeyemi said.

According to him, a total of N163,000 was recovered from the suspects.

Adeyemi, therefore, called on the general public to be aware of the nefarious activities of fraudsters and resist the temptation of falling victims of fraudulent online social media platform that request for payment for easy enlistment.