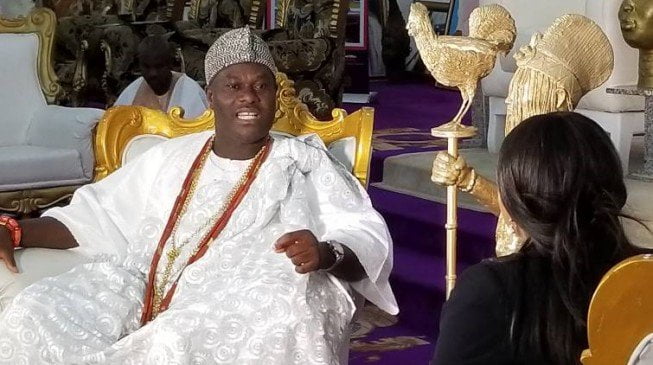 The Ooni of Ife, Oba  Adeyeye Enitan Ogunwusi, Ojaja II has shown his displeasure to incident in ekiti state  as it prepares for the governorship elections.

Naija News learnt that the monarch showed his displeasure when  the British High Commissioner to Nigeria, Mr Paul Arkwright, paid him a courtesy visit at his palace in Ile Ife yesterday.

“What I heard happening in Ekiti State during this electioneering period does not make me happy as their father. Enough of crisis, we do not want any crisis in Yorubaland. Where there is violence, progress and tranquillity will be deprived, but where there is peace, there is progress. “I specifically warn all youths in Ekiti state to maintain peaceful coexistence before, during and after the election, as brighter future awaits them if they productively discover themselves,” Ooni said.

He also urged the youths not to allow themselves to be used as agents of electoral violence and criminality. He said the youths should rather aim to lead in the political capacity such as governorship or presidency in the nearest future.

The British envoy, Paul Arkwright who is also the United Kingdom Chief Observer to Nigeria on the Ekiti gubernatorial election also joined voices with the Ooni and called for free, fair, credible and peaceful election in Ekiti State on Saturday.

He said the purpose of his coming is based on observing the conduct of Ekiti gubernatorial election which precedes 2019 Presidential by the Independent National Electoral Commission (INEC).

The British High Commissioner also called for calm urging residents to shun electoral violence. He added that crisis cannot add any value to the growth and development of the state.

Security operatives on Wednesday dispersed supporters of the Peoples Democratic Party (PDP) from the popular Fajuyi Park in Ado Ekiti while they were holding a rally ahead of the governorship election in the state.

Gunshots were reportedly fired into the air.

The Deputy Inspector General of Police (DIG), Habila Joshak in reaction said the police could not have denied Governor Fayose being elected by the people access in the government office.

He explained that the police only carried out their duty of preventing law and order in the area.