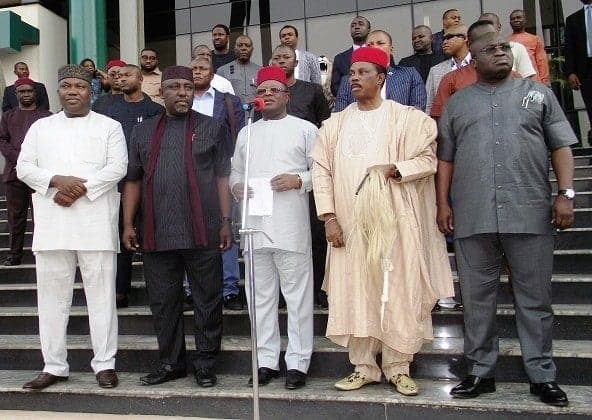 No Land For Cattle Ranching In South East

The governors of the South-East states, at the end of their meeting in Enugu on Sunday, have disclosed that no land would be made available for the establishment of cattle ranches in the zone.

The meeting, which was attended by Governor Ifeanyi Ugwuanyi of Enugu state, Dave Umahi of Ebonyi state, also had in attendance, the deputy governors of Abia and Anambra states who represented their principals.

Naija News however learnt that Imo State Governor, Rochas Okorocha, was absent and was not represented by any official at the meeting.

The President General of Ohanaeze Ndigbo, Chief Nnia Nwodo, was also at the meeting to present the socio-cultural group’s ‘template on restructuring’ to the state governors.

Governor Umahi who also doubles as the chairman of the South-East governors forum, while speaking with newsmen at the end of the meeting which lasted till Sunday evening, revealed that the governors had reached a consensus not to allow cattle ranching in the zone.

He also in his communique, denied reports that some states in the zone have made land available for ranching as requested by the federal government.

“No land in the South-East has been donated for ranching. We have not donated any land; we have not been asked to donate and we are not going to donate.

The governors, also condemned the recent killings in Plateau State, and demanded “justice for Plateau people.”

The governors, also resolved to meet with federal security agencies to adress the challenges posed by the movement of herdsmen in the South-East.

Reading from a communiqué adopted at the meeting, Umahi said, “The South-East Governors Forum commiserates with the Governor of Plateau State and the people of the state for the recent killings.

“We condemn the killings and join other regions to demand justice for the Plateau people.

“South-East governors have noticed increased challenges in the movement of herdsmen from one state and region to another with the resultant effect of massive destruction of farmlands with attendant clashes with farmers.

“South-East governors have been spending huge funds in settling farmers whose farms and crops are destroyed – we, therefore, request an emergency meeting in the South-East with federal security chiefs, farmers and herdsmen to stop the movements and prevent clashes.”

The South-East governors also used the opportunity to restate their demand for restructuring.

“Ndigbo’s Stand on Restructuring of Nigeria was presented to the South-East Governors Forum by the Ohanaeze President, based on the resolutions arising from the Awka enlarged Igbo meeting.

“He (Ohanaeze President) also laid down the template for the governors. The Forum thanked Ohanaeze on a job well done and reiterated its earlier stand that restructuring is the only way forward for Nigeria.

“The Forum also decided that the governors should take a studied look at the template of restructuring and will make its final stand clear by the next meeting of the Forum,” the communiqué said.