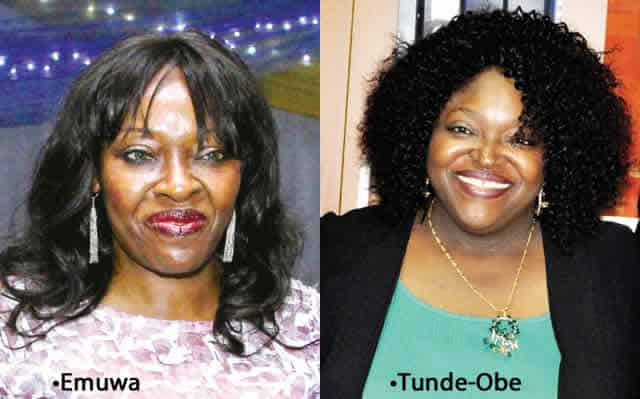 Mrs Angela Olufunmilayo Emuwa (nee Aboderin) has been appointed by the Board of Punch Nigeria Limited as its new Chairman, the appointment follows the demise of the Chairman of Punch, Mr Gbadebowale Wayne Aboderin, who died on May 30, 2018.

Mrs Valerie Omowumi Tunde-Obe (nee Aboderin) was appointed by the board as a non-executive director, her appoinment took effect on Tuesday.

Before her appoinment, Emuwa, one of the daughters of the founding chairman of PUNCH, the late Chief Olu Aboderin, was a non-executive director of the company, having joined the board on July 29, 1994.

She earned a postgraduate diploma in Business Administration and an MBA from the ESUT Business School. She also holds a diploma in Communications Advertising and Marketing (CAM).

She is the immediate past Chairperson, Golden Hearts Touching Lives Initiative, a non governmental organisation that caters for indigent persons with special needs and the President, Autism Parents Association International, an NGO for Nigerian parents with autistic children. Emuwa, who sits on the Board of other companies, is married with children.

Tunde-Obe, whose appointment also took effect from Tuesday, June 26, 2018, attended Grange School and Queen’s College, Yaba, Lagos. She holds a bachelor’s degree in Philosophy from the University of Lagos. Between 1995 and 2001, she worked as a Senior Manager, Copywriting at LTC/JWT Advertising. In 2001, she and her husband founded KOPYKATS & Associates, a scriptwriting, music production and marketing company.

Tunde-Obe is the owner of Hair Afrique Beauty Salon, a subsidiary of United Hairways Beauty Company and Iya Ibadan Local Cuisine and Foods which promotes foods from Western Nigeria.

A certified member of the Association of Advertising Practitioners of Nigeria since 2004, Tunde-Obe is a director of Punch Commercial Printing. An entertainer and lover of the arts, Tunde-Obe is a co-founder of a music group, T.W.O (Tunde and Wunmi Obe), with her husband, Tunde. She is married with children.