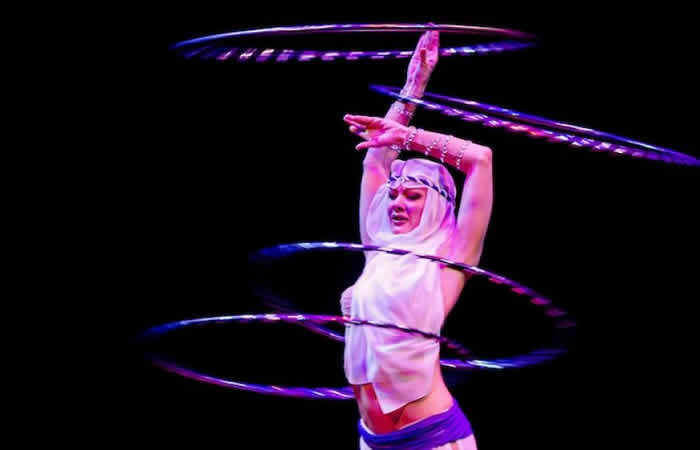 One of the controversial Russian female circus performers. (Photo Credit: The Malaysian Insight)

Controversy In Saudi Arabia As Woman Performs Half Naked

The head of entertainment authority in Saudi Arabia has been reported sacked, over a backlash against a circus featuring women wearing figure-hugging costumes.

“Ahmad al-Khatib, chairman of the Saudi General Entertainment Authority has been removed from his position,” the official Saudi Press Agency (SPA) said citing a royal decree, without giving a reason.

A video circulating on social media appeared to show a female performer in a tight pink costume, drawing outrage from Saudi arch-conservatives.

Khatib’s sacking comes in the midst of Crown Prince Mohammed bin Salman’s far-reaching liberalisation drive that has ended decades-long bans on women driving and cinemas, and allowed some mixed-gender concerts.

Khatib had been leading a multi-billion dollar initiative to turn the austere desert kingdom into a culture and entertainment hub.

The vigorous backlash against what was widely identified online as a Russian circus underscores the challenges facing the prince as he seeks to modernise a country steeped in conservatism.

“Cynics who lightly dismiss the colossal challenges that (the prince) faces in his social reforms should view this video of young Saudi men passionately denouncing the presence of a Russian circus with women performers in their country,” tweeted Ali Shihabi, director of the pro-Saudi, Washington-based think tank, Arabia Foundation.

The video posted by Shihabi included a cutaway shot from the circus and monologues from several men who emphasised the need to uphold Islamic principles.

The conservative petro-state has some of the world’s toughest restrictions on women, who are required to wear body-shrouding abaya robes in public.

In April, Saudi sports authorities shut down a female fitness centre in Riyadh over a contentious promotional video that appeared to show a woman in tight gym clothes.

Defending the decision, Saud al-Qahtani, a media adviser to the royal court, said at the time that the kingdom was on the path of “moderation without moral breakdown”.

Later that month, the sports authority apologised over a promotional video of a WWE event that showed scantily clad female wrestlers drawing euphoric cheers from men and women alike.

Khatib was appointed in 2016 as the head of the country’s entertainment authority, seen as the main engine of the kingdom’s social transformation.

“This authority has been a key player in driving social change in the kingdom and hence has been heavily criticised by conservatives,” Shihabi tweeted.

In February, the General Entertainment Authority announced it would stage more than 5,000 festivals and concerts in 2018, double the number of last year, and pump $64 billion in the sector in the coming decade.

The reform stems partly from an economic motive to boost domestic spending on entertainment as the kingdom has reeled from an oil slump since 2014.

Khatib’s ouster follows a major cabinet reshuffle earlier this month that saw a heavy focus on culture and religion, as the kingdom undergoes a major image overhaul.

This was the second significant government change since the appointment of Prince Mohammed, son of the king, as heir to the region’s most powerful throne.