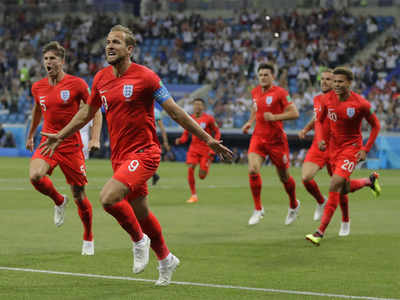 Harry Kane was on point as the Three Loins of England devoured Tunisia 2-1 as he score a brace to give England all three point in their group G opener.

The England captain, opening the scoring in the 11th minutes when the Tunis keeper pushed a loosed ball towards his direction. The crowned the victory for the European country in the 91st minute.

Tunisia got one into the next of the English team in he 35th minute with a clinical penalty kick.

England would be facing Panama in their second game. Panama, unfortunately lost 3-nil to Belgium.

Belgium forward, Lukaku also was impressive as he scored two goals against Panama in the 69th and 75 minutes of the game.

Mertens, also netted for the Belgium team in the 47th minute of the game. Belgium will be slogging it out with Tunisia in their next game.