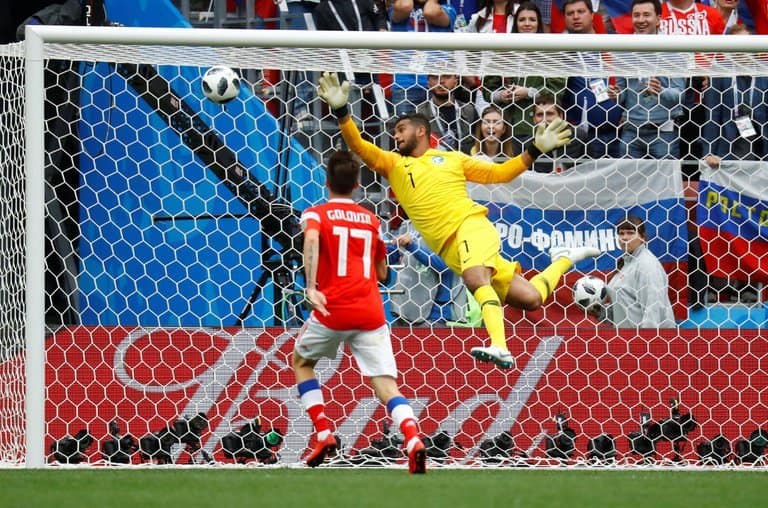 Russia Kicked start their World Cup campaign with an outstanding 5- Nil win over the Middle Eastern Saudi Arabia as Yuri Gazinsky scored on a header 12 minutes in, and afterward Saudi Arabia could offer little resistance. A pair of extra-time goals gave the host team some extra cushion in the goal-differential category.

With Saudi Arabia kicks off wearing green, while Russia is in red, Russia Showed their technical maturity, as the 67th and 70th ranked teams thrilled fan with a record breaking show piece.

The First goal in the world cup came from Russian Forward Yury Gazinsky, who hammered it home with his head, after the saudi team lost control of their defense.

Although the Saudi team had a fair share of ball possession, but they struggled to take control of their defence.

Denis Cheryshev, who came in for injured Alan Dzagoev, got by the defense with his trickery and had the keeper at his mercy as he force the second goal in with a powerful kick in the 43rd minute.

Artem Dzyuba, with his head, got the third goal into Saudi net He was marked by just one man and muscled his way clear for the easy header. Like Cheryshev with the second goal, Dzyuba was a substitute.

Denis Cheryshev got his second goal, turning and firing into the top of the net. Sometimes a 4-0 score flatters the winners. Not this time. Saudi Arabia was terrible.

The last goal of the match was a magical one as Russia sealed their lead with a free kick just outside of the box 18 yard by Aleksandr Golovin.

Still in group A, Egypt would be face Uraguay on Friday the 15th of July, Morocco and Iran, Portugal and Spain would be slogging it out on Friday also.