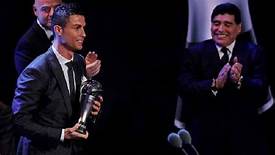 The world football’s governing bodywho made this known today also  said Ten candidates for each of the four awards will be named on July 23, eight days after the end of World Cup in Russia. With the help of fan voting, they will be winnowed down to three candidates in each category.

FIFA will also hand out awards for best goalkeeper, for fair play and for the best fans as well as the Puskas award for the goal of the year and will  name a World 11.

The ceremony was also held in London last year, when Real Madrid’s Portuguese superstar Cristiano Ronaldo collected the award for male player for the second straight year and his then club manager, Zinedine Zidane, was named the best coach.