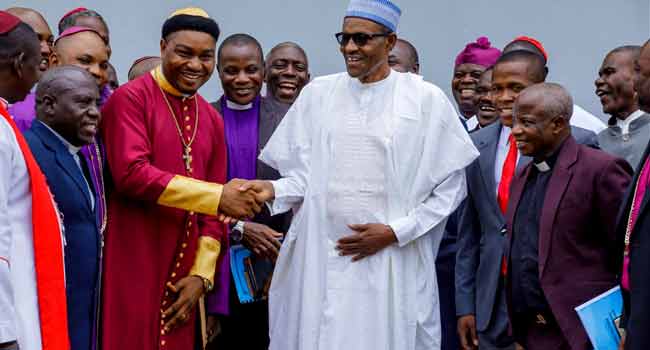 No hidden religious agenda in my government – President Buhari

President Muhammadu Buhari, has once again spoken out on the resolve of his administration to ensure that all units of the Nigerian federation,irrespective of religious, political, ethnic or other forms of affiliation, are adequately represented in his administration and taken care of by the government.

The President made the statement on Thursday, when he received a delegation of the Arewa Pastors Non-Denominational Initiative for Peace in Nigeria led by Bishop John Abu Richard at the state house in Abuja.

President Buhari, called on religious leaders to work towards the broader goal of building a strong and unified nation, and avoid insinuations that could divide the populace, especially along religious lines.

This is as contained in a statement made available by Mr. Femi Adesina, special adviser to the President on media and publicity.

“Some voices, for political or ethnic reasons are making unguarded statements accusing the government and myself in particular of religious bias.

“Let me assure you, honourable clergymen that this is far from the truth. In my career as a soldier, administrator, and politician, I have never veered from my oath of office.

“When I had the honour to lead a Military Government there were more Christians than Muslims in the Federal Executive Council and the Supreme Military Council.

“This was not by design but I appointed people on their merit without the slightest bias. The present Federal Executive Council is also evenly balanced; again not by design but by respecting and rewarding individual qualities,’’ the President said.

As earlier reported by Naija News, the clergy men condemned religious leaders who make utterances capable of inciting violence and urged the federal government to intensify efforts targeted at tackling insecurity in the country.