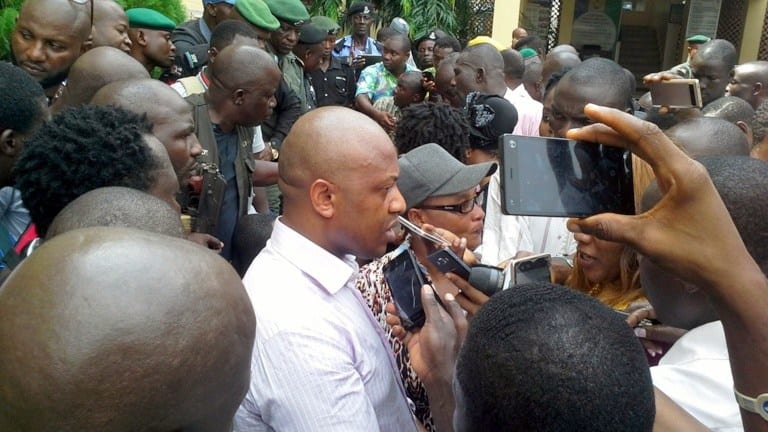 Justice Adedayo Akintoye of an Igbosere High Court, Lagos, on Thursday dismissed the application by the suspected kidnap kingpin, Chukwudumeme Onwuamadike a.k.a Evans, seeking to quash charges slammed on him, saying they are not defective and not an abuse of court processes. Naija News Learnt

Evans had asked the court to quash the two separate charges filed against him by the Lagos State Government.

The Lagos State Government had brought a fresh five-count charge bordering on conspiracy to kidnap, kidnapping and attempted murder against Evans and three others.  Evans is charged alongside Joseph Emeka, Ugochukwu Nwachukwu and Victor Aduba.

In the second charge, Evans is being tried alongside Joseph Emeka, Linus Okpara and Victor Aduba.

At the resumed hearing of the case on Thursday, Justice Akintoye said based on the proof of evidence before the court, issue for determination was whether a prima facie case has been
established against the defendants.

She, however, held that a prima facie case had been established as there were grounds for proceedings, adding that the proof of evidence must sufficiently link the defendant to the offence
allegedly committed.

“Looking closely to the proof of evidence attached to the information in this case, a prima facie case has clearly been disclosed against the defendant/applicant,” Akintoye said.

The judge said the victim in the instant case, Uche Okereafor’s wife was the person who paid the ransom, adding that the statement of the first defendant (Evans) itself alleged that the first
defendant was the master mind and gang leader.

“Other defendants participated in several kidnappings and shared the ransom collected from their victims.

“The third defendant ( Ugochukwu Nwachukwu) in his own statement and proof of evidence showed that he is a member of the gang and shared in the ransom collected from victims.

“I hold, therefore, that the proof of evidence disclosed a prima facie case against the first and third defendant,” she said.

Justice Akintoye also said that the charge filed against the defendants were not defective based on the provisions of Section 152 and 153 of the Administration of Criminal Justice Law (ACJL) of Lagos State, 2015.

She added: “It is my view that the prosecution has complied with provisions of this section in view that every offence shall be charged separately.

“I hold that the charge presently constituted is not an abuse of court process, therefore cannot be quashed.”

Justice Akintoye also said that the court does not have the power and the jurisdiction to quash the charge before the close of the prosecution’s case.

“I don’t believe that the court has the power to quash the charge before the close of the prosecution’s case as in the clear wordings of Section 262 of ACJL, such application is premature and can not be sustained.

“The defendant must wait until the close of the prosecution’s case before applying for any charge to be quashed.

“I, therefore, hold that the defendants application to quash the charge leveled against them is hereby refused and dismissed,” Akintoye ruled.

She also said the same fate is applicable to the second defendant (Joseph Emeka), who urged the court to expunge his name from the charge stating that no prima facie case was made against him.

According to her, the proof of evidence proved that a prima facie case has been established against him.

She said the court found no merit in the second defendant application and consequently dismissed it.

In the motion on notice, Ogungbeje said that ‎all the charges and the proof of evidence before the court did not establish any prima facie case against the first defendant, insisting that all the charges were “grossly defective, incompetent and constituted an abuse of court processes.”

He stated that the prosecution had earlier filed similar charges and amended charges bordering on kidnapping against the same first defendant pending before the same High Court of Lagos State.

He averred that the two separate charges were brought in bad faith to “harass, oppress, hound, frustrate, vex and intimidate the first defendant.”

‎In her response to the motion, the State Director for Public Prosecutions (DPP), Ms Titilayo Shitta-Bey, said there was sufficient proof and evidence linking the first defendant to the offences brought before the court and therefore, urged the court to dismiss the application.

Shitta-Bey said the first defendant was charged with the offence of conspiracy to commit kidnapping and kidnapping of one Uche Okereafor.

She also said that other charges filed against the first defendant before other judges involved different defendants, different offences and different victims.

Meanwhile, the second defendant, Joseph Emeka, urged the court in a motion on notice to quash the two-count charge preferred against him, adding that the proof of evidence did not disclose any prima facie case against him.

However, the counsel to the fourth defendant, Emmanuel Ochai, agreed with the submission and arguments of the first and second defendants’s counsel.

Evans was arrested on June 10, 2017 and was in August 2017 arraigned before Justice Hakeem Oshodi at an Ikeja High Court for kidnapping