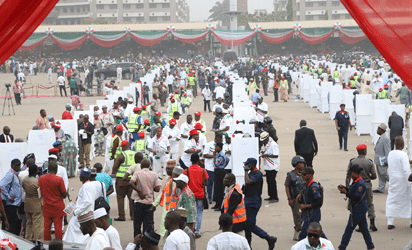 Due to the recent decamping from Peoples Democratic Party, PDP and other political parties into the All Progressive Congress, APC in Katsina State, NCP has accused the APC of wooing decampees with public funds accruing into billions.

Abdulmumini Sani Shehu, NCP chairman stated this in a press briefing. He claimed that the APC led government in the state has spent billions in wooing decampees.

Shehu said decamping from other political parties especially from the PDP to APC has now become a business venture and the only means to have access to public funds in the state.

He admonished President Muhammadu Buhari not to be part of the planned reception which he described as a fraud and deceptive.

He said the programme was designed to drag the name of President Buhari into the mud by the Governor Aminu Bello Masari’s administration through deceptive programme of receiving some decampees.

“The President should know that decamping from other political parties especially from the Peoples Democratic Party, PDP to APC has become a business venture in katsina state. “The decampees often go round beating their chest that they have collected their share from Masari before agreeing to decamp.

“The APC State Party chairman, Alhaji Shittu was recently quoted in a programme in the state owned television bragging publicly that they have settled all decampees before agreeing to join them. In reality the issue of decamping is the only means of having access to public funds in katsina state.”

The NCP Chairman further said the APC in the state is sick and the sickness was precipitated by the relegation of genuine party men and promoting PDP elements that fought the emergence of APC government across the state.

“It was relegation of your genuine party men that forced one of your loyal party men in Daura town, Alhaji Umar Margyel in a radio interview to cry out that Masari has abandoned real party men.

“One would begin to wonder on why a government that is yet to execute any meaningful project is spending billions to woo PDP decampees. No Buhari, you should not be part of this grand deception. It is evidently clear that the Masari led administration does not share your vision of fighting corruption and impunity,”

Shehu stated. Meanwhile, efforts to reach the APC State Chairman, Alhaji Shittu S. Shittu for comments on the allegations proved abortive as his numbers were switched off.