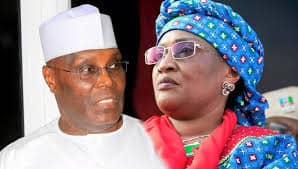 Following the declaration of a serving Minister of Women Affairs, Aisha Alhassan to support Former Vice-President Atiku Abubakar for the 2019 Presidential election, there are therefore, indications that the APC National Working Committee (NWC)members are divided on how to handle the statements credited to Atiku and the minister.

Punch reports that the NWC would at its meeting today (Monday) discuss the possibility of punishing the former Vice-President and the minister.

Alhassan had last week said she would support Atiku against Buhari in the 2019 presidential election.

Also, the former Vice-President lashed out at the Buhari-led government, saying he had been sidelined by the government.

A party chieftain, told Punch that the NWC would discuss how to handle the duo.

He said that although members had not agreed on whether they should be sanctioned, but Atiku risked further isolation from the party and the government.

“What is certain is that the issue will be discussed, but their actions will not attract punishment like suspension. Atiku will be isolated from the party and the government,” the source stated.

Some of the party’s leaders, who spoke on condition of anonymity, in separate interviews in Abuja, on Sunday, expressed mixed feelings about Atiku’s latest outburst.

Read also: Buhari travels to US next week

One of the respondents, a member of the NWC, said the former Vice-President was simply voicing out his frustrations about the mean treatment he had been receiving since the APC came to power.

He said, “Aside from not consulting him on a number of issues, his business interests have come under attack by the same government he worked hard to bring to power.

“Some individuals around the President are using Buhari’s name and office to make enemies for him. You and I know that the sudden change of policy with respect to the ports operations which Intels use to handle is not an accident.

“The man is a businessman and politician and like everybody else, he had certain expectations when he joined the party and worked with others to form government.”

The source added, “Atiku ought to have avoided saying what he said to the media because members of the cabal who have always been pushing for his isolation now have further ammunition to fight him.

“I am afraid, he risks further isolation because even those close to him within the party may be compelled to switch camp for political survival.”

Another party leader said those behind the leak of private comments made by Alhassan, were out to pull her down.

As to whether the party would consider punitive measures against the two, the source said, “You don’t punish people for expressing an opinion.”

His counterpart in the South-South, Hilliard Ita, said he was not in a position to comment on the Atiku matter.

He however said comments attributed to the Minister of Women Affairs were unbecoming of a minister.

Meanwhile, a Second Republic lawmaker Junaid Muhammed, has reacted to a call by Senator Sheu Sani, who on Saturday, urged Buhari to reach out to the APC National leader, Asiwaju Bola Tinubu.

Muhammed said the President, in his two years in office, had made more enemies than friends, adding that Buhari should reach out and listen to the people.