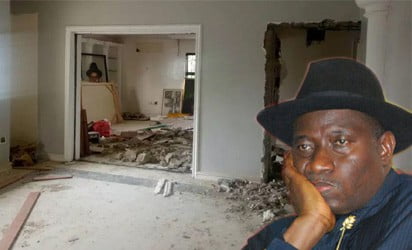 Former President, Dr. Goodluck Ebele Jonathan, said yesterday, that all the movable items in his house in Gwarimpa, Abuja, were carted away by thieves.
Jonathan, made this statement through his spokesman, Ikechukwu Eze, last night. He said the theft was discovered last month, after which it was reported to police authorities.

The statement read: “Following series of enquiries from journalists and other concerned Nigerians on the extent of the reported vandalisation and theft in the house of former President Dr. Goodluck Jonathan located in Gwarimpa, Abuja, we, therefore, would like to make the following clarifications: The theft was discovered last month upon which a report was duly lodged with the relevant police authorities.

“The police immediately commenced investigations which led to the arrest and detention of some suspects, six of whom were policemen, even as investigations continue.

“The house, which the former President bought from CITEC estate developers in 2004, was totally stripped bare by the thieves who stole every movable item in the house, including furniture sets, beds, electronics, toilet and electrical fittings, as well as all internal doors and frames.

“However, contrary to exaggerated reports in some media, only six television sets, three refrigerators and one gas cooker were stolen. Being that the house is a modest, a 4-bedroom duplex, it couldn’t have been fitted with “36 Plasma television sets and about 25 refrigerators” as falsely reported by some media outfits.

“We thank all Nigerians for their show of concern and wish to convey the former President’s goodwill to all Nigerians.”
According to Vanguard, a security source involved in the investigation had said by the time family members of the former President were alerted to the looting early this month, the house had been stripped bare.
The source also said two dealers who had been main recipients of the stolen items were said to have closed down their shops at Panteka market and have since remained at large.

The source also revealed that the looting was discovered when a neighbour noticed “severe damage in the house” and called a member of President Jonathan’s family to ask whether the house was undergoing renovation.

The former President was said to have personally gone to inspect the property after which he reported the vandalism to the Inspector-General of Police, Ibrahim Idris.

“After a team of officers dispatched to the scene confirmed the crime, Mr. Idris was said to have ordered the arrest of the three police officers who were still on guard duty at the residence.

They were arrested about two weeks ago,” the source stated. A trader at Panteka market, who confessed to being close to one of the fleeing buyers of the stolen items, according to sources, said the police officers first brought some items to the market for sale in early 2016.

“It all started sometimes around March 2016 when a mobile police sergeant came to Tipper Garage market and brought some items for sale. He approached one of the wholesalers to buy them, but the trader said he does not buy items from an unconfirmed owner.

“The officer who identified himself as Sergeant Musa told the trader that he was one of the security men guarding Mr. Jonathan’s private residence at Gwarimpa. He took the trader to follow him to confirm that he was not a thief who had come to sell off stolen properties in the market.

‘’The trader followed him to the residence where he met two other policemen, an Inspector and a Sergeant. They convinced him that the items were part of gifts to them,’’ the source had said. Sources said it was noticed subsequently that the stream of transaction had no end, as Sergeant Musa continued to invite the trader to the residence to pick up fresh items.

The source said: “At a point, the trader became scared when he suspected foul play and told Sergeant Musa that he was no longer interested in the transaction. However, the officer later got another customer, a wholesaler in the market, who would eventually buy almost 80 per cent of all the properties removed from President Jonathan’s residence.

It was learnt that Jonathan had lived in the house for about a year when he was vice president. His mother was also said to have lived in the house after the former President moved to Aso Rock Villa upon becoming Acting President in 2010. Although Mr Ikechukwu Eze confirmed the story on Monday, he did not, however state what was stolen in the house. Also cofirming the incident on Monday, spokesman of FCT Police Command, DSP Anjuguri Manzah, had said in a statement:

“The FCT Police Command wishes to inform the general public that it has commenced full-fledged investigation into the case of theft in the Gwarimpa residence of former President, Dr Goodluck Ebele Jonathan.

“Preliminary police investigation on the matter has revealed that some items were found to be missing in the house. “Meanwhile, the Policemen who are supposed to be on guard duty at the house have been detained for questioning.

“Investigation to find out what actually happened is currently in progress. The command wants to assure all that the result of findings on the on-going investigation will be made public.”