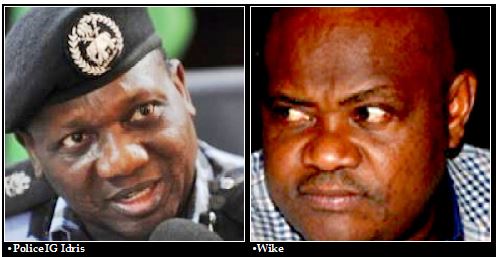 The Inspector-General of Police, Mr. Ibrahim Idris, has asked a Federal High Court in Abuja to strike out a plea by Governor Nyesom Wike,asking the court to prevent the police from investigating various acts of criminality perpetrated during the December 10, 2016 rerun in the state.

Idris stated in a notice of preliminary objection that Wike was, by his suit, seeking to cover his (Wike’s) tracks.

The two plaintiffs, who filed the suit, were the Office of the Governor of Rivers State (first plaintiff) and Wike in person (second plaintiff).

The respondents are the Inspector-General of Police, the State Security Service and a Deputy Commissioner of Police, Damian Okoro.

The IGP and Okoro, through their lawyer, Mr. Deji Morakinyo of Mr. Femi Falana’s law firm, filed the notice of preliminary objection, challenging the jurisdiction of the court to hear the case.

Idris and Okoro described the suit as a reflection of Wike’s desperate move to pre-empt the outcome of the investigation by the police Special Investigating Panel into the crimes committed during the rerun elections.

The IGP argued that the Judicial Commission of Inquiry, set up by Wike, had no power to investigate the crimes committed during the rerun polls in Rivers State and prosecute the culprits.

He argued that pursuant to Section 150 of the Electoral Act, the crimes committed during the rerun polls in Rivers State were federal offences, which could not be investigated and prosecuted by the plaintiffs.

The IGP gave a background to why he constituted the investigation panel.

He stated, “Even though a combined team of the Army, police and other security personnel were on the ground during the election, criminal elements committed many crimes and unleashed violence on unarmed voters and electoral officers.

“Two policemen were beheaded by a criminal gang. Based on complaints received from several members of the public, coupled with the crimes committed in the presence of security personnel, the 1st defendant (IGP) decided to set up a special investigation panel of the police, headed by the 3rd defendant, to investigate the killings and other electoral offences which occurred during the rerun election.

“The 1st and 3rd defendants have made progress in the investigation being conducted into the crimes. Among the several arrests of the criminal suspects made is that of the fellow, who stole the telephone (handset) of the beheaded Deputy Superintendent of Police.

“The bodies of the beheaded policemen have also been recovered while the tape of the telephone conversation between Governors Wike and Ayodele Fayose (of Ekiti State) on the rerun election is being analysed.

“The policemen, who accompanied the 2nd plaintiff (Wike) when he stormed polling units and the collation centre, have been identified, investigated and dismissed by the Police Service Commission, while the 1st defendant has ordered that they be tried for contravening the provisions of the Electoral Act when they illegally accompanied the 2nd plaintiff to polling units and collation centre.’’

He added, “In a desperate move to cover up the grave crimes perpetrated during the rerun election and shield him from investigation, the 2nd plaintiff is praying this honourable court to stop the 1st and 3rd defendants from carrying out their statutory duty of investigating the crimes on the grounds that he had set up a judicial commission of inquiry.

“Based on the questions for determination and the relief sought by the plaintiffs, the defendants have challenged the jurisdiction of this honourable court to hear and determine this case.”

Justice Gabriel Kolawole of the Federal High Court, Abuja, had, on two occasions, declined Wike’s request for an interim order, stopping the investigation by the police.

“The question, which tasked my thought is whether the filing of a notice of preliminary objection, strictly speaking, is a process by which the defendant, against whom an order of interim injunction is sought, ought to file? I really do not think so.”