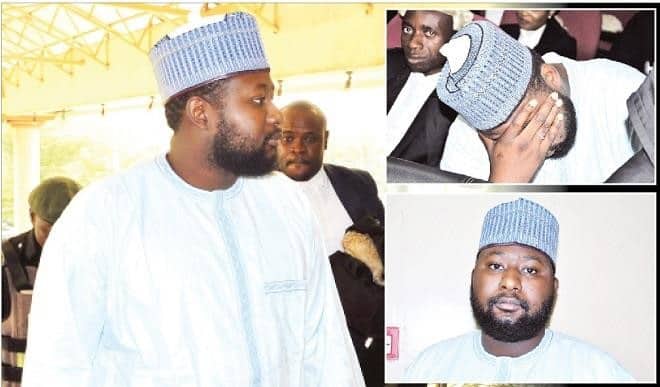 The son of former FCT minister, Shamsudeen Bala Mohammed, during his arraignment by the Economic and Financial Crimes Commission (EFCC) at the Federal High Court in Abuja yesterday.

Son of a former FCT minister, Shamsudeen Bala Mohammed, was yesterday remanded in prison custody after his arraignment on fraud charges.

Justice Nnamdi Dimgba of Abuja Federal High Court ruled that Shamsudeen be kept in Kuje Prison pending ruling on his bail application on Friday February 3. The judge also fixed trial for March 27 and 28.

The Economic and Financial Crimes Commission (EFCC) had told the court not to grant bail to Shamsudeen saying he could attempt to destroy evidence in his prosecution.

EFCC counsel, Prince Ben Ikani told the court that the accused failed to submit to the commission’s routine data capturing after he was granted administrative bail.

Arguing his counter affidavit to the bail application filed by defence counsel, Chris Uche (SAN), Ikani said Shamsudeen, who also failed to give his international passport to the EFCC “is not somebody to be trusted on the surface.”

But defence counsel asked the court to grant the bail application explaining that Shamsudeen has not jumped bail since he was granted administrative bail. He added that the defendant cannot just volunteer his passport if EFCC did not demand for it.

The EFCC accused Bala of paying sums of money in cash, which exceeded the statutory limits, to various companies for acquisition of properties without going through a financial institution.