The 2022 World Tourism Day, celebrated on September 27, came with a whole new experience for the people of Igbeti in Oyo State, located in the southwestern part of Nigeria.

Naija News reports it was the first time in the history of Igbeti, a town located in Oke-Ogun, Olorunsogo Local Government Area (LGA) of Oyo State to host the celebration of the United Nations’ international event.

Igbeti, which is an important town in the LGA is surrounded by sixteen major beautiful rocks that present captivating scenery. Most visited amongst the hills are the Iya Mopo and Agbele Rock. Yet, Iya Mopo is renowned for attracting tourists to the town so much endowed with Marble.

Naija News understands that following turns of visitation to other tourist centres in the Southwest state in the previous years, it was unanimously agreed by authorities in the region that Oke-Ogun, Igbeti precisely should host this year’s World Tourism Day event.

To mark the 2022 World Tourism Day event, traditional rulers in Oke-Ogun, including Kishi, Igbope, Igboho, Igbeti, Tede, Okeho, Okaka, Iwere, Igbojaye, Ilero and Ogbooro, in persons or by representation, all assembled at the Iya Mopo hill on Tuesday, September 27.

Politicians, civil servants, religious leaders, students, members of the National Youth Service Corps (NYSC), artisans and indigenes all joined with their presence at the Iya Mopo hilltop exploration on this day.

Though there was much anxiety to see the State Governor, Engineer Oluwaseyi Abiodun Makinde, but the Peoples Democratic Party (PDP) chieftain was represented by his Deputy, Barrister Bayo Lawal.

The event also had many top government officials in attendance.

The event featured cultural displays including drumming, dancing, presentation of digital documentary, the narration of Iyamopo, Agbele and other hills in the ancient town.

History provides that Iyamopo is a goddess created allegedly by God to help the human race. The goddess of pottery stood out in beauty at 350m in the village of Igbeti. On the hill are two mysterious caves beside each other which are said to be Iya Mopo’s resting places. Also on it are three rivers whose waters cannot be joined together

Climbing of Iya Mopo hill is considered another form of healthy exercise that needs endurance and fitness.

However, the beautiful sight of Iya Mopo hill, the cave and exploration of other parts of the tall and wide hill is best enjoyed during festive periods when indigenes of Igbetiland home and abroad, traditional worshippers, Christians and Muslims would gather together in unity to climb the hill, return to its ground floor and host varieties of events till dawn.

The Tour – On World Tourism Day, visitors and indigenes at arrival made their way up the Iya Mopo hill to see for themselves all that has been said about the house of the goddess.

To encourage the climbing, Bata drummers followed with drum beating and skilful dance steps as people hiked to the hilltop.

Also, the presence of top media platforms including Naija News, TVC, Ministry of Information (MIS), National Television Authority (NTA), Broadcasting Corporation of Oyo State (BCOS) and other indigenous reporters and photographers who were covering the events, encouraged first-timers to exercise their muscles in reaching to the top.

Request To The Oyo State Government

Following a series of events at the reception ground, representatives from the Igbeti town in their different remarks commended the incumbent government of Oyo State led by Governor Seyi Makinde.

Having thanked the governor for his achievements and contribution to the community in the last four years, they protested that the government was yet to improve in some major projects in Oke-Ogun, Igbeti particularly.

The representatives who spoke differently lamented the current poor state of the town’s health facility, the General Hospital. Top on their list of requests however, was the approval and establishment of at least a higher Institution of learning in Igbeti.

They also asked the government to prioritize the construction and fixing of major roads that lead in and out of the town. While encouraging the government to also explore other resources in the community, the residents also asked that the road leading to the Iya Mopo tourist centre should be tarred from the town to the edge of the hill to further attract tourists and as well encourage new settlements.

Naija News understands that Igbeti is well known for its rich marble deposits, the reason why it is called ‘Marble City’.

However, at the 2022 World Tourism Day event, Oyo State Deputy Governor, Barr. Bayo Lawal revealed that there is another resource available in the area but yet to be explored.

According to him, he made the discovery while carrying out some research about Oke-Ogun not long ago. The deputy governor boasts that without other natural opportunities, the Marble stones in Oke-Ogun alone if well explored, are enough to sustain the Oyo State’s economy.

Barr. Lawal further stated that the particular resource yet to be well known in the area, from his research, can only be found in places like Brazil.

The Deputy Governor while responding to lamentations and requests earlier made by indigenes of Igbeti town said: “Oyo state government led by Governor Makinde is committed to improving the agricultural sector in Oke Ogun axis.

While reacting to assertions that the government has cheated on other parts of the state by taking most of its establishments to Iseyin, Lawal said Iseyin is like the central part of the thirty-three local government areas in Oyo State.

He said Oke Ogun is the centre of development for the state and that was why Iseyin has become a central attraction as every other major town within the area links to Iseyin town.

The Deputy Governor assured the residents that Makinde, if re-elected, will further build on boosting the state’s economy, particularly to encourage businesses in the Oke Ogun axis.

Speaking on education, Lawal said the Oyo State government has not only taken over Ladoke Akintola University of Technology (LAUTECH) from its neighbour, Osun State but has ensured that the institution’s Agricultural department is brought to Oke Ogun to bolster the region’s endowment.

Lawal stressed that since Oke-Ogun tourist centres are more natural than others, they should be well explored.

“Igbeti is a whole tourist centre. The town is blessed with natural resources. Marble is enough to sustain Oyo State’s economy,” the Deputy Governor said.

“Travellers can testify that places like America explore trades and tourism to boost their economies. For this reason, let’s think outside the box and look into the tourist centres in Igbeti and explore them beyond.

“Resources in Oke Ogun are beyond imagination. There is a natural resource present in the region that in the whole world, only Brazil has such. And this can be used for a variety of things including plywood and chemicals.

“The Chinese have at many times used inducement to covet these resources. I have listened to your many requests here in Igbeti. The requests are common everywhere. I understand also that your requests are so that this government can prosper even more.

“However, you as citizens of the state also have roles to play. Gradually the incumbent government will do its part. You also must support the government to get those things done.

“In the coming election, your votes have to go for Governor Makinde. About the General Hospital you mentioned, the government will look into it soon as possible.

“We will ensure there is transformation at the general hospital in Igbeti. We have done it in Tede recently. The next stop will be Igbeti by God’s grace.”

The Deputy Governor added: “New settlements can come around these mountains if we’ll explore. The roads around here will be tarred to the Iya Mopo Hill.

“We will ensure that a higher institution is established in Igbeti soon. The local government is due for that. I will deliver your messages to Governor Makinde.

“I thank you all, male and female for your presence here. God will help us to ensure the improvement of tourism in Oke- Ogun. My unreserved homage to all the traditional rulers present. God bless you all,” Lawal said.

Others include: Chairman, Oyo state Board for Tourism, Arts and Culture, Elder Adejumobi;

Hon. Oni J. Abiodun – Commissioner for Environment and Mineral Resources | Paying homage to the deputy governor and other dignitaries present

Barr Lawal driving off after the event

A side view of Iya Mopo hill

Media representatives making moves to get comments from the deputy governor 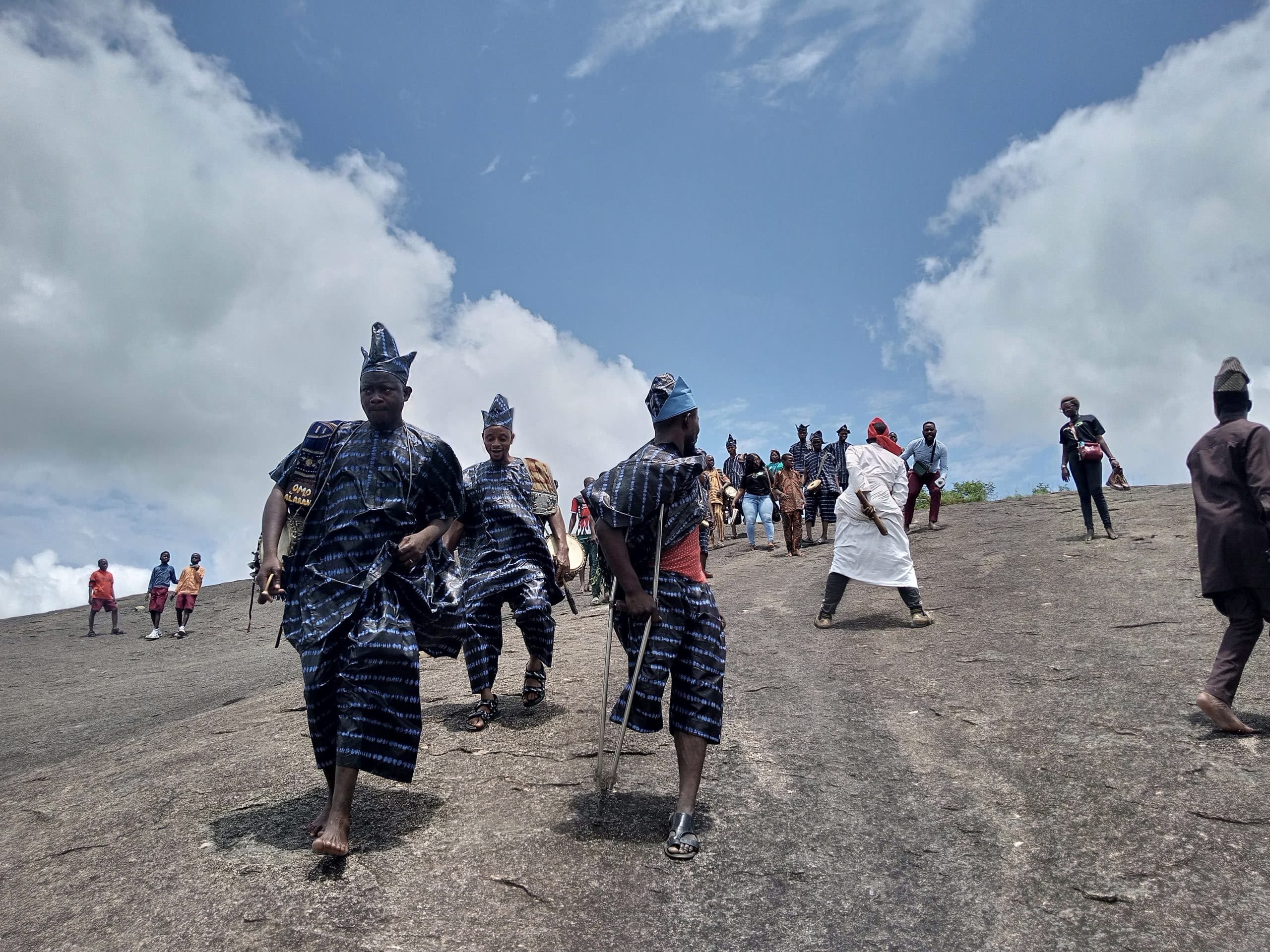