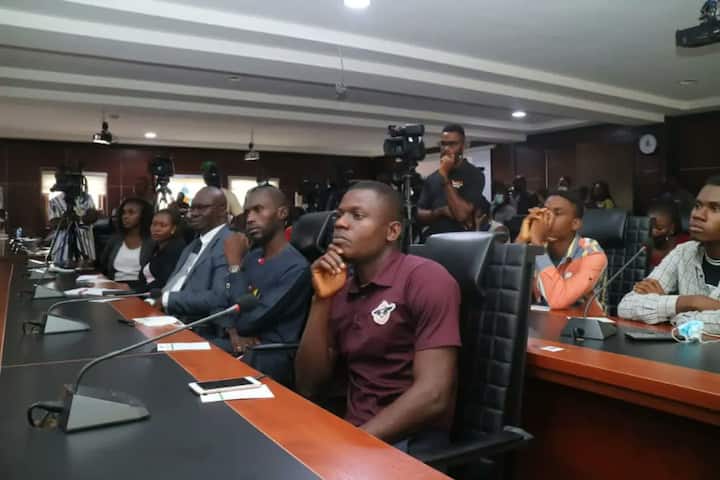 Cross section of participants at the one-day roundtable in Abuja. Photo credit: @nplambassadors

Experts have identified viable means by which Nigeria’s currency, Naira can be improved in value.

Having sat for hours at a one-day roundtable on national issues organised by Development Specs Academy in Abuja, the experts resolved that the country must increase its productivity and change consumption patterns as that alone can shore up the value of the Naira.

The roundtable meeting, Naija News understands was also attended by participants from the civil society communities, youth-based organisations, youths in politics and social media influencers, among others.

While delivering his speech at the event, Dr Ikechukwu observed that the Central Bank of Nigeria, CBN, had made efforts with several policy interventions to improve the value of the national currency.

In his mentions, Ikechukweu listed the Anchor Borrowers Programme as one of those programmes by the apex bank which was created to enhance farmers’ access to loans.

“This initiative alone has created millions of jobs, taken many youths off the crime path and rescued many local economies. Only economy-reflating and socially impactful efforts, as seen in such initiatives, in addition to consuming what we produce and producing what we consume, will give us the prospect of bringing up the value of the National Currency and keeping it up,” he said.

However, Brig Usman described as unacceptable, the level of insecurity in the country.

He charged the incumbent government to make strategic efforts towards ensuring the release of citizens being held in captivity by terrorists.

Usman also urged the government to prioritise the release of kidnapped victims including the remaining Chibok girls, Leah Sharibu, the Kaduna train victims and others.

He said: “Government should be proactive in information dissemination about what it is doing concerning those in captivity in various parts of the country.”

Meanwhile, a former secretary of the Catholic Secretariat in Nigeria, Rev Ehusani, admonished the young generation to take advantage of their numerical strength to vote for competent Nigerians in the 2023 general election.

He warned that the country could have a looming crisis if public universities were not opened. It also called for the promotion of vocational skills and innovative entrepreneurship and values reorientation for youths to create the right mindset that would enable them to function successfully in a 21st-century world.