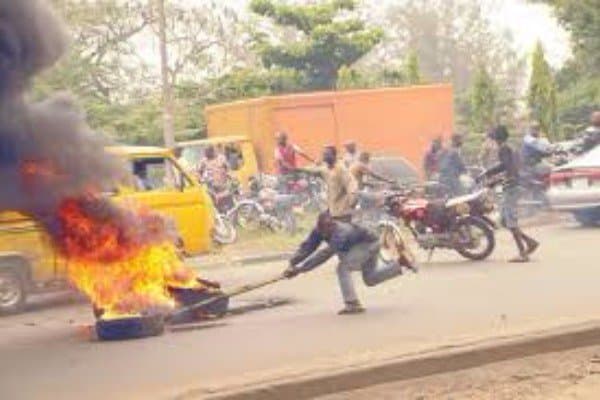 It was gathered that at least five persons were reportedly killed and houses set on fire in the clash.

According to a resident, an accident involving an Okada man led to the clash in the community.

“Five persons that I know have been killed in this incident. We have been calling for security intervention to no avail,” the resident told Daily Trust.

“We are really worried that this crisis is tilting towards  ethnic dimension.”

The traders were said to have attacked the Okada rider, whom they blamed for recklessness which led to the death of the passenger.

The okada riders colleagues reportedly moved to rescue him from the attackers and the situation degenerated afterwards.

Another account has it that the driver of the trailer which crushed the passenger to death was attacked and some persons mobilised to defend him.

Sanwo-Olu made the announcement while briefing heads of security agencies in the state at a meeting at the State House, Ikeja on Wednesday.

The governor stated that the total ban on Okada in the six local councils takes effect from June 1, 2022, and would be fully enforced.

Sanwo-Olu pointed out that the ban in the six local councils is part of the phase banning okadas in the state.

Recall that the ban was imposed over the killing of a sound engineer by some Okada riders.

The engineer was killed and set ablaze in the Lekki axis of the state last weekend.