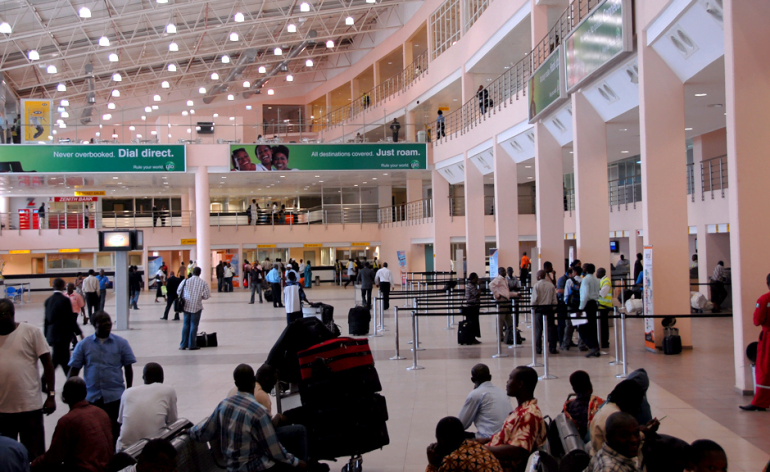 One of the few places in Nigeria where the badge for corruption and debasement must never be worn is at foreign visitors’ major gateway into the country. This, unfortunately, is not to be as underhand dealings at the Murtala Muhammed International Airport (MMIA), Lagos has brandished the shame of a nation. A YouTube video trended online early this week where an American blogger by the name Sabbatical narrated his experience at the hands of corrupt officials at MMIA when he visited Nigeria.

In the content shared with his over 70k subscribers, the popular blogger narrated, “I’ve been around the world and I have never seen an airport as insane as this one you have in Lagos. It is extremely corrupt. Picture corrupt. The Nigerian airport in Lagos is that very definition of corruption that will pop up in the dictionary. Coming in, you don’t want to wait in line for your Covid test, pay this guy. You don’t want to have your bags checked, pay this guy… Oh my God. It is very stressful and draining here.”

If this were to be an isolated case, Sabbatical will not be taken seriously. There have been numerous reports of shenanigans at the Lagos international airport. Barely a week prior to the latest video, there was the super-viral video of an African-American lady, Alina, who said she was delayed for two hours by officials who claimed that her PCR Covid-19 test certificate was not genuine. Despite telling them that the test was conducted at a lab listed on the portal, the despicable officials refused to scan the QR code on the form and demanded she pays N25,000 before getting a pass!

The lady refused to indulge the corrupt officials but pressed to speak with the station manager who ultimately saved the day. This has been the experience of many foreigners arriving in Nigeria through MMIA Lagos. While many of them quietly part with the sum being extorted, others like Alina have gone abroad to recount their ordeal, thereby damaging whatever is left of the country’s goodwill.

This malfeasance did not start today. It would be recalled that in November 2018, music legend, Tuface Idibia while gushing over the Kotoka International Airport in Ghana threw shades at Nigerian authorities over the state of airports in his home country. Since then, things have so deteriorated that it is now been said that there is no international airport as insane as the one in Lagos!

This insanity has been a dominant topic in many travel/tourism chat-groups online where expatriates say their initial experience at the Nigerian airport was not what they expected and not one they will want a repeat. One was reported as saying that he has “love for Nigeria and the food but a terrible distaste for the airport”. This is no thanks to double-dealing officials whose avarice won’t allow them to see the terrible damage they are doing to the country right at their duty post.

These officials reportedly prey more on expatriates arriving from developed countries whose travel documents they dismiss as fake without due diligence, just to force some money off them. Those not audacious enough to extort money over a false claim, beg for handouts from these expatriates at the slightest opportunity. By this and other unprofessional conduct, they erase whatever the country stands to gain from the various investment drives of government at all levels. This is even as the actual job they are paid for suffers or is compromised.

Naija News is worried that these criminality and sharp practices at the Lagos airport can be the last straw for an investor who had looked beyond the insecurity and other disincentives to still invest in Nigeria. When forced by the fleecing at the Lagos airport to take their investments elsewhere, these same corrupt staff will one way or the other suffer the repercussions. When warning signals at the airport make foreigners refrain from plowing their money into the Nigerian economy, the resultant loss in job creation shrinks employment opportunities available for the children and siblings of the shady officials at the airport.

Even if not directly affected on this basis, they are not immune from the rise in crime rate which increasing unemployment can trigger. Now, if a taxi driver can return a $40,000 sum misplaced by a passenger at Terminal II of MMIA, why wouldn’t airport officials who earn more be more content with their salary and be decent in the discharge of their responsibilities? Naija News recalls that in May 2015, Josephine Agwu, an airport cleaner on a salary of N7,800, found a forgotten $28,000 and other foreign currencies totaling about N12m while cleaning the toilet area and returned the princely sum to the owner. Also in May 2018, another janitor, Charity Bassey, found a nylon containing $6,000 and handed it to security operatives at the terminal. These very noble acts happened in the same MMIA which corrupt officials have now made an airport of ignominy.

Given that these public servants, who put their country up for sale at the airport, don’t understand what enlightened self-interest is all about, Naija News wonders what the Federal Airports Authority of Nigeria (FAAN) has done to stop the in-your-face corruption happening at the nation’s foremost airport. It is categorically unacceptable that FAAN could not sniff out nor correct these embarrassing misconducts happening right under its nose. How can there be an agency like FAAN yet Nigeria is saddled with this crying shame? Well, we are not surprised about FAAN’s inaction given the decrepit state of facilities at the nation’s airports.

Naija News demands that sanity must urgently be brought to bear on MMIA and similar airports in the country where corruption walks on all fours. President Muhammadu Buhari must rise to the occasion by constituting a high-powered inter-ministerial committee to bring Nigerian airports and operations therein up to global standards. Since those working at the airports wear tags bearing their names, nothing should prevent the bad eggs from being fished out and punished.

Some of the videos trending online captured the faces of the corrupt staffers. They must therefore be investigated with stiff sanctions meted out to those found culpable. This will go a long way in serving as a deterrence to others. The notoriety at the Lagos airport must not be allowed to continue; that is not who Nigerians are as a people! While most of the factors discouraging foreigners from doing business in Nigeria are complex in nature, the problem of unprofessional conduct by airport officials can be easily addressed.

Naija News, therefore, demands prompt action from the authorities. The FAAN Managing Director, Rabiu Yadudu should take a cue from the Nigeria Immigration Service boss, Isa Idris, who recently disguised as an applicant for an international passport at the service’s Lagos State Command, Ikoyi, and apprehended some NIS officers who offered to engage in shady deals with him. The leaders of this country, whose predilection for globetrotting is unparalleled, must be scandalized and ashamed by what foreigners are saying about the nation’s airports. This shame should therefore make them resolve to bring global best practices to bear on MMIA Lagos, and spare Nigeria further ridicule.